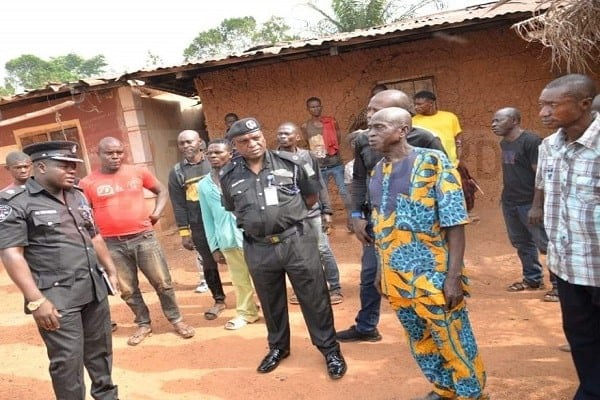 The report of invasion by Fulani Herdsmen in Abumwenre community in Ovia North East Local Government has been dismissed.

A team of journalists visited the community for a fact-finding investigation on Tuesday, 4 January 2022.

A day after the new year celebration, social media was crammed with the news of some alleged Fulani herdsmen in military uniform who allegedly invaded and sacked the community.

Standard Gazette’s journalist was among the reporters that went on a fact-finding on Tuesday.

There was no attack or invasion of the community as reported; the indigenes told SG journalist.

The dismissed report alleged that herdsmen, heavily armed, went to the community on Sunday, 2 January and were shot sporadically.

The report alleged an appeal to the vigilante members to stop shooting their guns regularly.

The news, first reported by a national newspaper, claimed the herders frightened some of the community members who luckily escaped.

The report caused panic and pandemonium in the area as residents far and near expressed worry.

Though the report was false, SG learned that the community is living in freight as Fulani herdsmen had warned them not to enter some parts of their farms.

The Odionwere of Abumwenre community, Pa Solomon Omoragbon, told our journalist that the herders “complained that we are disturbing them and they want us to stop hitting our security alert gongs as it scares their animals.”

Pastor Arrested For Having Sex With Mother And Her Two…

In what suggests fear, Pa Omoragbon added, “The way they came indicates that they might come back to attack our people. They even warned us not to enter a part of our farmland again.

“They said their cows want to feed there. We are afraid. We want security agents to protect us in our farmland, please.”

Meanwhile, the Edo State Police Public Relations Officer SP Bello Kontongs was also in the community with a joint security team to assess the situation.

SP Kontongs said, “You can see that there were no crises here at all. We are going to beef up heavy security in the area. I want to assure Edo state people that all their villages are safe from any form of attack”.

He, however, called on the people to continually “say something when they see something strange.”

The Edo State ruling party, the Peoples Democratic Party (PDP), has blamed the opposition, All Progressives Congress (APC), for the misinformation.

The party described the news as “vile”, malicious, fictitious and ill-fated.”

In a statement by the State Publicity Secretary, Mr Chris Nehikhare alleged the APC resorted to “their familiar antic of stage-managing the orchestration of chaos where there is none in order to drive alternative facts, propaganda and falsehood.”

“There is no denying that the latest attempt is as a result of the accolades heaped by citizens and visitors to the state on the Edo State Governor, Mr Godwin Obaseki, his administration and security agencies in the state for a peaceful yuletide celebration, during which, no violent crime was recorded.”

The party urged the people to disregard the false alarms and “ill-fated propaganda” as it aimed to drive selfish interest in stirring up a crisis where there is none.

The Editor, Ehi Ekhator contributed to this report.

©Standard Gazette, 2021. Unauthorized use and/or duplication of this material without express and written permission from this site’s publisher is strictly prohibited. Excerpts and links may be used, provided that full and clear credit is given to Standard Gazette with appropriate and specific direction to the original content.
Abumwenre CommunityEdo Statefulani herdsmen
0 26
Share

Lady’s Mic Cut Off In Church After Giving Testimony About…

Pastor Arrested For Having Sex With Mother And Her Two Daughters

Pastor Arrested For Having Sex With Mother And Her Two…