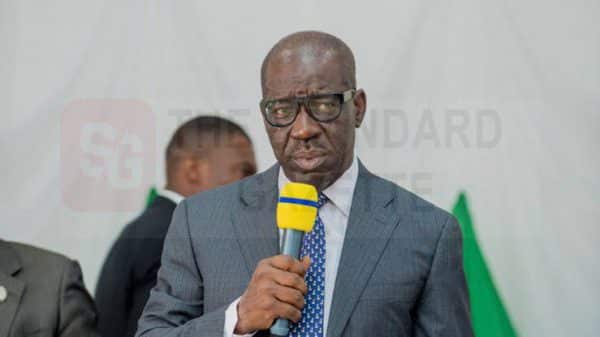 The All Progressives Congress (APC) has slammed Edo State Governor, Godwin Obaseki over what it calls his failure to address the water problem in the Edo Central Senatorial District and other parts of the state.

This is contained in a statement released over the weekend by the Edo APC spokesman, Mr Chris Azebanwan, and made available to newsmen.

According to the statement, the claim by Obaseki that his administration has within the last five years focused on water supply and, hence, sees no reason for water shortage in the state, is untenable.

The Governor had claimed his administration has expended huge amount of resources on the water sector and infrastructure in the State. However, Azebanwan in the statement, made available by NAN in Benin, said the party was baffled concerning the water issue.

He made reference to the Northern Esan water supply scheme handed over to the state by the federal government in 2018. A project which cost N3.85 billion.

“In September 2019, the Edo Government publicly declared that a water reticulation project as part of the scheme, was nearing completion,” it said.

It added that the state claimed it had concluded the training of communities to set up water associations while it planned “to meter the water from the plant”, to regulate usage and check leakages.

The statement further said, “close to three years now, no drop of water was available from this water scheme to any home in the catchment area of the project.”

The APC Chieftain noted that it was unfortunate that Governor Godwin Obaseki now have to make promises again of erecting boreholes, stating that it should admit its failures.

©Standard Gazette, 2021. Unauthorized use and/or duplication of this material without express and written permission from this site’s publisher is strictly prohibited. Excerpts and links may be used, provided that full and clear credit is given to Standard Gazette with appropriate and specific direction to the original content.
0 3
Share FacebookTwitterGoogle+ReddItWhatsAppPinterestEmailFacebook MessengerLinkedin