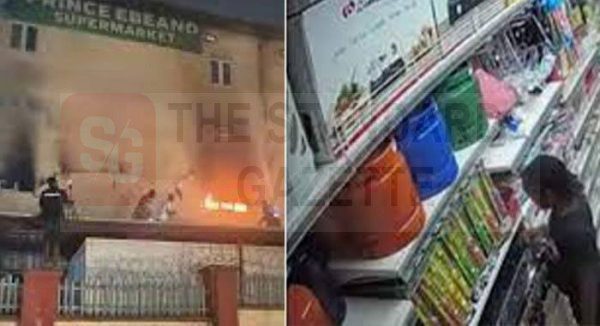 A closed-circuit television footage has revealed how a young girl set fire to a multi-million naira shopping centre, Ebeano Supermarket Lokogoma, in the Federal Capital Territory. N5b worth of goods were said to be destroyed in the inferno which occurred on July 17.

The fire raged for over 24 hours.

The FCT Fire Service spokesman, Ibrahim Muhammad, had stated that many FCT fire stations, including Nji, Games Village, Garki and Asokoro, had intervened in fighting the inferno.

However, in the footage which has now gone viral, the suspect, who has been identified, was seen walking into the supermarket along with two suspected female accomplices.

The girl, dressed in a black top and a pair of jeans, could be seen walking to a section of the supermarket where gas cylinders and electric cookers were kept. She, afterwards, picked up a lighter and lit an item there and walked away.

The two other suspected accomplices were seen outside where sympathisers had gathered. In the footage, one of them was seen smiling. The incident has been reported to the Police command in the FCT for proper investigation.

©Standard Gazette, 2021. Unauthorized use and/or duplication of this material without express and written permission from this site’s publisher is strictly prohibited. Excerpts and links may be used, provided that full and clear credit is given to Standard Gazette with appropriate and specific direction to the original content.
0 43
Share