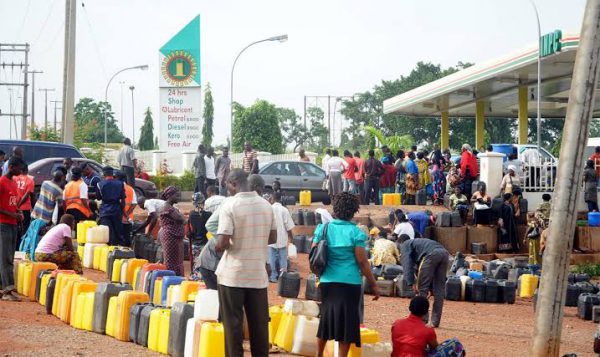 On Tuesday, the country's fuel shortage got worse, forcing drivers to spend hours at gas stations in Lagos, the Federal Capital Territory, and other locations.

For oil marketers, increasing the price of the product at the pump is the best way to address the nation's growing fuel line problems.

Even though some retailers had already increased the price of petrol in their locations, they admitted that the action had not received official approval and mentioned that retailers could face penalties for selling beyond the set price.

It was also observed that some filling stations began to hoard products as those that dispensed petrol had to increase the price of the commodity in Lagos.

Black market players took advantage of the fuel scarcity, selling as high as N300/litre in Lagos, Abuja, Nasarawa and other states.

The official price of petrol is currently between N162 and N165 per litre and has not yet been deregulated.

Independent marketers said on Monday that it would be challenging for them to sell at the official pump price after introducing a new, unapproved price regime of between N170 and N190/litre over the weekend.

©Standard Gazette, 2021. Unauthorized use and/or duplication of this material without express and written permission from this site’s publisher is strictly prohibited. Excerpts and links may be used, provided that full and clear credit is given to Standard Gazette with appropriate and specific direction to the original content.
0 7
Share

Man to wash public toilets for 8 months as punishment