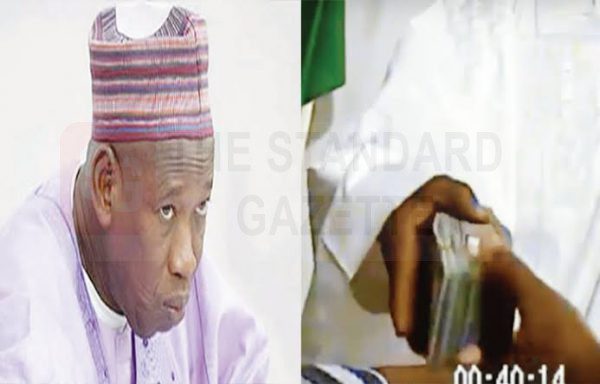 A Kano state high court has ordered Abdullahi Ganduje, governor of Kano, to pay N800,000 to Ja’afar Ja’afar, publisher of Daily Nigerian, an online newspaper, over a dollar bribery video.

The 2018 video which went viral featured a man and another which looks like Ganduje, stalking in wads of dollars inside a white ‘babariga’ clothe.

The governor had denied the videos, saying they were doctored. He blamed it on mischief makers who were bent on tarnishing his reputation.

He had also gone to the court in the attempt to clear his name, while asking the publisher to pay N3 billion in damages.

However, on June 28, Abdulahi Ganduje filed an application at the court through his counsel, Offiong Offiong, seeking to discontinue the case.

During the hearing of the case, on Tuesday, Utum Eteng, counsel to Ja’afar, and M.B. Azumi, counsel to Penlight Media Limited, publisher of Daily Nigerian, did not object the application, but demanded the sum of N400 million as part of terms to discontinue the suit.

The lawyers also demanded an apology, which they said should be published in national dailies, as well as a pre-action letter. While the judge, Suleiman Na-mallam granted the application to discontinue the case and awarded the sum of N400,000 each to Jafar Jafar and his company, he was mute regarding the plea for a public apology by the governor in national dailies.