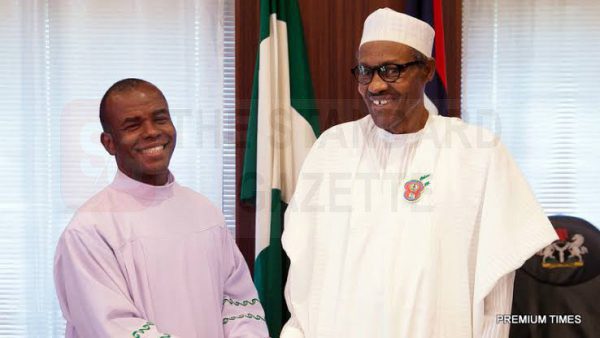 Enugu based clergy and the Spiritual Director of Adoration Ministry, Rev. Fr. Ejike Mbaka, has stated that God told him to withdraw his support for President Muhammadu Buhari. The clergyman noted that God is not happy with his government because of the insecurity and killings in the country.

He also prayed for Nnamdi Kanu and praised him for his courage according to a video obtained by Sahara Reporters.

Father Mbaka prayed that God bless the IPOB leader, stating that it is not wrong for someone to have courage, rise and say that his people are maltreating his people.

“I want to tell you something, wherever he is, May God bless him because if somebody has risen to shout his brothers are suffering, may the Lord bless his courage,” Mbaka said.

“I put a call to Buhari, but no response” – Governor narrates how apathy, negligence of Mr President fuels ethnic tensions, insurrections