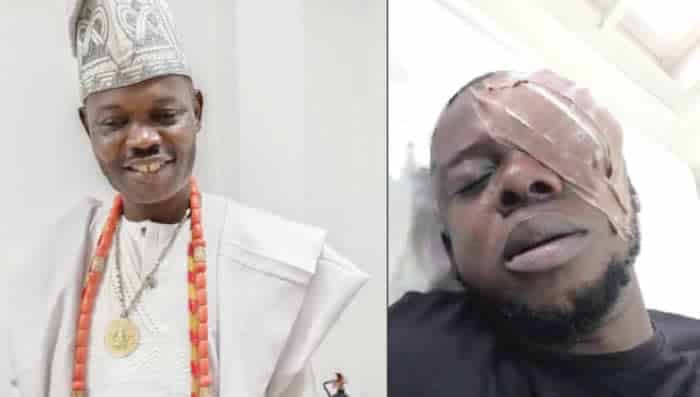 A businessman named Wasiu Oduwole has called for justice after a local chief named Nureni Oduwaye is accused of kicking him in the eye at the Moore Blessing Hotel in Ikenne, Ogun State's Sagamu Local Government Area.

The sufferer allegedly couldn't see with his eyes anymore.

After allegedly accusing Wasiu of dancing with his queen during a birthday celebration at the hotel, Oduwaye allegedly committed the act.

The celebrant, identified only as Iya Alaje, is reported to have invited the king, his queen, and other guests.

When Nureni Oduwaye, the monarch, arrived, the party had already begun. Everyone was dancing as the deejay played music. Wasiu expressed his surprise that the celebrant and the queen were singing secular music and praised them by dancing with them because persons of their age and status typically don't enjoy secular music, let alone know the words.

The victim, Wasiu, was supposed to provide pepper soup for the event and get paid.

"As I was attempting to lie down to continue begging, he used his leg to kick my left eye. The injury in my eye was so severe that I was rushed to a nearby hospital from where I was transferred to the Olabisi Onabanjo University Teaching Hospital," Wasiu said in an interview with The Punch.

"The monarch only checked on me once and as I am speaking to you, I can no longer see with my left eye. I am blind in my left eye. The case was reported at the Area Command, Sagamu, but nothing was done because the police refused to carry out an investigation. The incident happened on September 21, 2022.

Wasiu said he wants justice as he bemoaned how Police authorities are treating the case to protect the monarch.

©Standard Gazette, 2021. Unauthorized use and/or duplication of this material without express and written permission from this site’s publisher is strictly prohibited. Excerpts and links may be used, provided that full and clear credit is given to Standard Gazette with appropriate and specific direction to the original content.
MonarchOgun StateQueen
0 14
Share