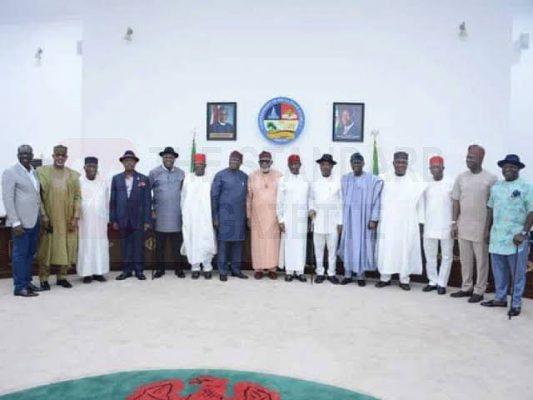 17 Southern Governors yesterday met in Lagos and issued a communique which centers on the present state of Nigeria, its future and the strengthening of the democratic institutions.

Regarding the PIB and the 3 percent for oil and gas communities, the southern governors insisted on five percent, and further rejected the proposed 30 percent of Nigeria National Petroleum Corporation (NNPC) profit for the exploration of oil and gas in the basins and frontier states.

On power shift, the forum said it remains committed to the “politics of equity and fairness”, and, as a result, resolved that “the next president of Nigeria should emerge from the Southern Region”.

Also on the issue of open grazing touted by the federal government, the governors said they have resolved to set a timeline of September 1, 2021, “for the promulgation of the anti-open grazing law in all member States”.

For a free, fair and credible election in 2023, the governors rejected the decision of the national assembly leadership to expunge sections that provide for electronic transmission of election results from the electoral act amendment bill.

“In order to consolidate our democracy and strengthen the Electoral process, the Southern Governors’ Forum rejects the removal of the Electronic transmission of the election result from the electoral act,” the communique read.

Regarding selected arrests and security, the governors re-emphasised the need for state police and resolved that henceforth, “if for any reason security institutions need to undertake an operation in any State, the Chief Security Officer of the State must be duly informed”.

The resolution addresses recent developments in Oyo state where the house of Sunday Adeyemo, a youth leader better known as Sunday Igboho, was raided by security agencies and the arrest of Nnamdi Kanu.

©Standard Gazette, 2021. Unauthorized use and/or duplication of this material without express and written permission from this site’s publisher is strictly prohibited. Excerpts and links may be used, provided that full and clear credit is given to Standard Gazette with appropriate and specific direction to the original content.
0 7
Share FacebookTwitterGoogle+ReddItWhatsAppPinterestEmailFacebook MessengerLinkedin

T.B. Joshua’s funeral to go ahead despite fire incident