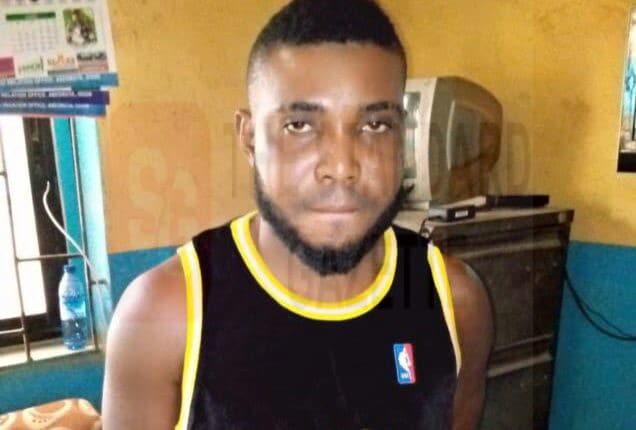 Kingsley Essien, 36, was detained by men from the Ogun State Police Command for allegedly trafficking his wife to Mali for prostitution and selling her two-year-old baby for N600,000.

DSP Abimbola Oyeyemi, the state Police Public Relations Officer, said in a statement on Thursday and reported by The Punch that the suspect was apprehended after his wife, Bright Essien, filed a report at the Agbara divisional headquarters.

The PPRO said, "Bright reported that sometime in October 2021, her husband, Kingsley Essien, informed her that he had secured a job for her in Bamako Mali and that he had assisted many people to that country for greener pastures before.

"She explained further that being her husband, she didn't suspect any foul play until she got to Mali, only to discover that she had been sold to a human trafficker cartel headed by a woman at the rate of N1,400,000.

"While in Mali, she was forced into prostitution but later found her way to the Nigerian embassy in Bamako before she was assisted back to Nigeria.

"On getting to Nigeria, she discovered that her two-year-old son in the care of her husband was nowhere to be found.

"On interrogation, the suspect confessed to the crime; he confessed further that he sold the two-year-old son to somebody at the rate of N600,000."

The state Commissioner of Police, Lanre Bankole, has ordered that the son's buyer be tracked down and detained, according to the police spokesperson.

©Standard Gazette, 2021. Unauthorized use and/or duplication of this material without express and written permission from this site’s publisher is strictly prohibited. Excerpts and links may be used, provided that full and clear credit is given to Standard Gazette with appropriate and specific direction to the original content.
Share on Social Media
twitterfacebookwhatsapplinkedintelegram
Follow us on Social Media
twitterfacebookinstagramyoutubelinkedinwhatsappgoogle playtelegram
Kingsley EssienMaliOgun Statetrafficking

The real date Rihanna gave birth to baby boy, as congratulations pour in