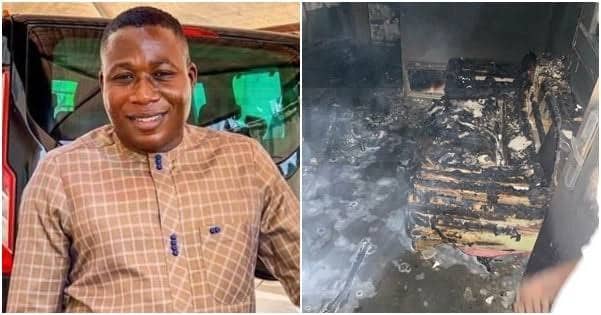 The Department of State Services has narrated how Yoruba rights activist Sunday Adeyemo aka Sunday Igboho escaped when the secret police raided his Ibadan residence because there was a gun duel between DSS operatives and Igboho’s guards which lasted for an hour.

The DSS also paraded 12 of Igboho’s followers in Abuja on Thursday, saying one other was being profiled.

The DSS said a joint team of security operatives had raided Igboho’s residence early on Thursday based on an intelligence report.

Parading the suspects at the national headquarters of the secret police, its spokesman, Peter Afunaya, said the security team was engaged in a gun duel by nine men suspected to be Igboho’s guards.

Afunaya stated, “A team of joint security operatives raided the residence of Sunday Adeyemo at Soka in Ibadan. This was based on intelligence that he had stockpiled arms in the place.

He stated that the team came under heavy gun attack by nine men suspected to be Igboho’s guards. Six were armed with AK-47 guns and three others with pump action rifles.

“In the course of the exchange, two of the armed men were gunned down, while the rest were subdued and arrested. Only one operative, who was shot by the assailants in his right hand, sustained injury. He has, however, received medical attention and is very stable.

©Standard Gazette, 2021. Unauthorized use and/or duplication of this material without express and written permission from this site’s publisher is strictly prohibited. Excerpts and links may be used, provided that full and clear credit is given to Standard Gazette with appropriate and specific direction to the original content.
0 57
Share FacebookTwitterGoogle+ReddItWhatsAppPinterestEmailFacebook MessengerLinkedin

Who are those Bankrolling Nnamdi Kanu’s IPOB? FG Goes After Backers