I could have released Nnamdi Kanu, but...- Muhammadu Buhari to Igbo Leaders 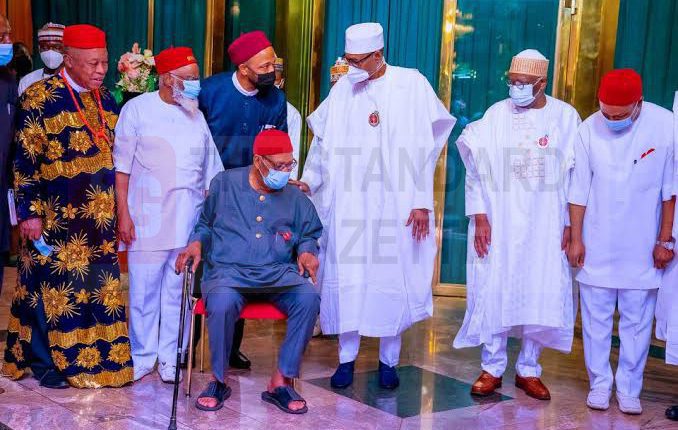 President Muhammadu Buhari has stated that the unconditional release of Nnamdi Kanu, the leader of the proscribed Indigenous People of Biafra (IPOB), who is now on trial, would be counter to the idea of separation of powers between the Executive and the Judiciary.

"As the leader of this country, you've placed an exceedingly difficult demand on me. Your request has very serious implications."

Nobody would suggest that in the six years since I became President, I have confronted or interfered with the functioning of the judiciary. God has preserved your life and blessed you with a clear mind and a sharp memory at your age. Many folks half your age are already perplexed. However, the demand you made is substantial. I'll think about it."

President Buhari emphasized his policy of non-interference with the judiciary, saying that when Kanu skipped bail, was apprehended, and returned to the country, "I thought the best thing was to put him to the system." Allow him to present his case in court rather than portraying the country in an unfavourable light from the outside. Giving him that chance feels like a favour to me."

The President expressed his condolences to Chief Amaechi, who had lately buried his wife, and prayed for her soul's rest.

The nonagenarian had called the situation in the Southeast "sad and dismal," adding that businesses have failed, education has deteriorated, and dread has spread throughout the region.

He pleaded for a political solution rather than a military one, claiming that if Kanu was released to him as the last living First Republic Minister, "he would no longer say the things he had been saying," and that he could control him because "not because I have anything to do with them (IPOB), but I am highly respected in Igbo land today."

Chief Amaechi claimed he had spoken with Nnamdi Kanu twice before, and the latter had withdrawn directives for civil disobedience.

"I don't want to leave this world without peace returning to my country," he ended. I believe in a unified Nigeria that is a force in Africa. Mr President, I want you to be recognized as someone who saw Nigeria on fire and put it out."

His Excellency Chukwuemeka Ezeife, former Governor of Anambra State, Bishop Sunday Onuoha of the Methodist Church, Chief Barrister Goddy Uwazurike, former President of the Igbo socio-cultural organisation, Aka Ikenga, and Mr Tagbo Mbazulike Amaechi were among the other members of the visiting delegation.

©Standard Gazette, 2021. Unauthorized use and/or duplication of this material without express and written permission from this site’s publisher is strictly prohibited. Excerpts and links may be used, provided that full and clear credit is given to Standard Gazette with appropriate and specific direction to the original content.
Share on Social Media
twitterfacebookwhatsapplinkedintelegram
Follow us on Social Media
twitterfacebookinstagramyoutubelinkedinwhatsappgoogle playtelegram
BuhariIgbo leadersNnamdi Kanu

What Funke Akindele did after my marriage collapsed - Comedienne Princess

Wema Bank Officials Meet Davido In Dubai, as he gives donations to charity