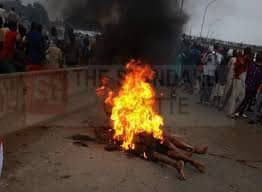 Apparently enraged over the manner security operatives in the country handle cases of bandits, Nigerians, predictably are taking laws into their hands. On Sunday, suspected bandits who allegedly kidnapped and killed two people within Isoko community in Delta State were apprehended and subsequently burnt alive by aggrieved youths in the locality.

The community vigilante group traced the hoodlums to their hideouts in the forests ina bloody encounter, where six of the suspected bandits were neutalized.

Also in a similar development, less than 18 hours after bandits kidnapped and later killed two persons in Tangaza community of Sokoto State, residents tracked down and killed a total of six of the gunmen.

Members of the vigilante in the community, armed with weapons such as cutlasses and local guns, and working with the police, also arrested four of the suspected kidnappers who were later taken to a police station. However, angry residents of the community retrieved the arrested suspects, lynched them and burnt their bodies.

©Standard Gazette, 2021. Unauthorized use and/or duplication of this material without express and written permission from this site’s publisher is strictly prohibited. Excerpts and links may be used, provided that full and clear credit is given to Standard Gazette with appropriate and specific direction to the original content.
0 19
Share

Inside ‘Abroad House’ in Lagos where Renters Travel Abroad From There