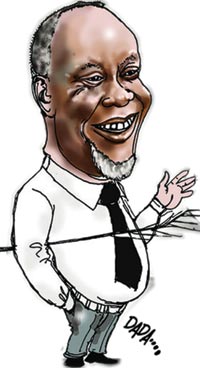 THE Village Master”, one of the few dramas that excited the Nigerian television stations in the 80s is on the news for the second time in barely a year.  Reports about the now rested TV drama, which was created by late Nigerian Ambassador to Ethiopia and cultural icon, Olusola Olusegun, made headlines late 2012 when the producer exited the stage after a very brief illness in a Lagos hospital.

The demise of the veteran broadcaster created a very big vacuum in the Art industry and of course, in the lives of his numerous beneficiaries. Just as Nigerians were beginning to come to terms with his exit, death dealt, yet another painful blow to the industry as Justus Esiri, the man who starred in Olusola’s drama as the Headmaster, also, left the stage.

The sudden death of  Legendary actor, Justus Esiri, on Tuesday night barely few days after popular songstress Goldie Harvey died also in Lagos, threw the entire entertainment industry into mourning,and may thus, be fittingly interpreted as end of an era.

According to reports, Chief Esiri, aged 71, who hails from Delta State, reportedly  died of complications resulting from diabetes at an undisclosed  hospital in Lagos. His death is the latest on the long list of celebrities in the entertainment industry who have died, leaving their fans and admirers, wondering who will fill up the huge vacuum their deaths have created.

It is so painful especially for the fact that these were all A-Listers in the entertainment industry, who have proved so much relevance in the industry. It is even more disheartening that they all died as a result of one ailment or the other, thus exposing the health conditions of  Nigerians who most often, struggle amidst ill health just to make a living due to the harsh economic realities of the time.

Chief Justice Esiri, renowned for his role as the headmaster in the popular 80’s sitcom, “The Village HeadMaster” was one actor who gave all Nigerians the privilege of enjoying and taping from his wealth of experience.

His role in “The Village Headmaster” was excellent, little wonder it shot him to limelight. He made sure viewers at home never regretted rushing home to get glued to their sets by 8pm on the day the programme was broadcast.

And after the programme went off air, Chief Esiri had a smooth transition into Nollywood, where he made himself even more relevant. From Playing the role of the loving father, to chief, business tycoon, Don, etc, Justus left no stone unturned at justifying whatever his earnings were and of course, his educational background.

He will forever be remembered as one of the movie actors who was so natural while on stage. He interpreted his roles with so much ease that viewers found it difficult drawing a line between the world of  make believe and reality.

In a career that spanned decades, Justus Esiri who was described by colleagues as one of the strongest men of the African film industry, contributed his quota to the growth of the industry as he has starred in many interesting Nollywood movies.

The multiple award winner was also star actor in acclaimed productions such as Wasted Years,The Investigation, Forever, The Prize, Last Knight, Six Demons, Corridors of Power,  The Tyrant,  The Ghost, Assassin’s Practice, (one of  his most recent movies produced last year), etc.

Born on 20 November 1942 in Oria-Abraka, Delta State, Esiri attended Urhobo College, Effurun, Warri in Delta State. He later traveled to Germany to study engineering at the Maximilian University, Munich, Germany, in 1964, where he developed  interest in theatre.

A  Member of the Order of the Niger (MON), Esiri started his acting career in Germany and ranked as the only Nigerian male  that performed  on stage between 1968 and 1969. He also worked as a translator at voice of Nigeria VON, German Service,

Late Esiri was last seen at a close-door parley, few weeks  ago when a delegation of the Federal Government led by Secretary to the Federal Government, Chief Anyim Pius Anyim, met some major stakeholders in the entertainment industry in Lagos, to inform them about their expected role in the forthcoming centenary celebration.