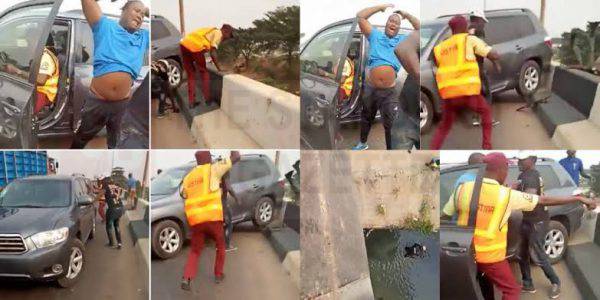 Jamiu Issa, a Lagos State Traffic Management Authority worker, was killed in the Lekki-Ajah area of the state by an unidentified driver.

On Wednesday, the agency's spokesperson, Olumide Filade, confirmed the news to our correspondent in a statement.

According to Filade, the motorist was traveling against the flow of traffic when he collided with Issa, who was attempting to capture him for the traffic violation.

Isa was transported to the hospital, where he was pronounced dead, according to him.

The statement read, “The driver of a green Toyota Sienna vehicle, with number plate, FST 901 AR, knocked down and run over a LASTMA official, Jamiu Issa, who was later confirmed dead, on April 19, 2022.

“The late Issa was said to have approached and accosted the Sienna vehicle driver who was driving against the direction of flow of traffic, facing oncoming vehicles from Chevron towards the Conservation Toll Plaza.

“It was reported that Issa was knocked down and run over by the traffic law offender. Issa’s colleague at the scene of the event quickly put a call through to the zonal head while some good Samaritans/eyewitnesses pursued the escaping Sienna driver to the Chevron Waterfront area where he was eventually apprehended and taken first to Ilasan police station, and eventually to Ajiwe police station, under which jurisdiction the event happened for proper investigation.

Roll Out Of CBC Is On Course, President Kenyatta Says