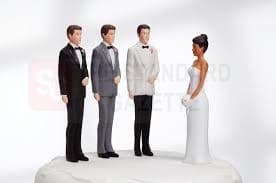 Proposals to allow women to marry more than one husband have generated widespread debate in South Africa.

The legalisation of Polyandry was put forward in a green paper published by the Department of Home Affairs. The new Marriage Act reform is widely not acceptable in South Africa, a country which supports Polygamy – marriage between a man and multiple women.

Professor Collis Machoko in an interview with BBC, stated that objections to the policy proposal are about “control.”

“African societies are not ready for true equality. We don’t know what to do with women we cannot control,” he said.

In Polyandry, the woman often initiates the relationships, and invites the husbands to join her union. Some pay the bride price, others opt to contribute to her livelihood. She has the power to remove a co-husband if she believes he is destabilising her other relationships.

Prof Machoko said love was the main reason the men he interviewed said they had agreed to be co-husbands. They did not want to risk losing their wife.

Some men also referred to the fact that they did not satisfy their wives sexually, agreeing to the suggestion of a co-husband to avoid divorce or affairs.

Another reason was infertility – some men consented to the wife taking another husband so that she could have children. In this way, the men “saved face” in public and avoided being stigmatised as “emasculated”.

©Standard Gazette, 2021. Unauthorized use and/or duplication of this material without express and written permission from this site’s publisher is strictly prohibited. Excerpts and links may be used, provided that full and clear credit is given to Standard Gazette with appropriate and specific direction to the original content.
0 30
Share