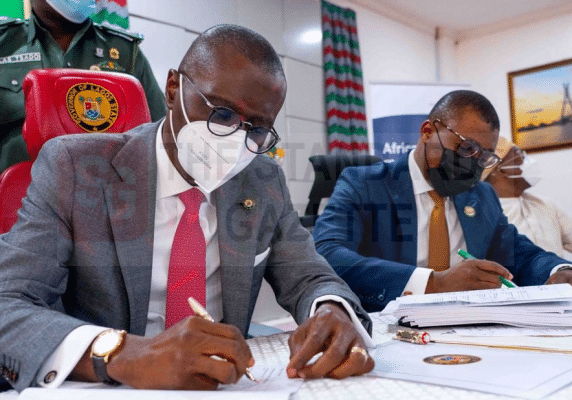 The Lagos government claims to have achieved an agreement with Shangisha landlords, who are judgment creditors with a claim to the property where the Magodo estate phase two is being built.
The land has been the subject of a legal battle since the 1980s, according to reports which was published by The Standard Gazette.

After their properties were demolished in Shangisha, the supreme court is claimed to have ordered Lagos state government to grant some landlords 549 pieces of land as a “matter of first priority.”

On December 21, a team of officers escorted bulldozers to the estate, but people protested the move, and after the state intervened, the police retreated from the estate.

Following a repeated threat of destruction and police invasion, there was another protest at the estate on Tuesday.

Following that, Lagos governor Babajide Sanwo-Olu paid a visit to the neighborhood and promised a “amicable settlement” to the conflict.

Mercy Aigbe: See the 3 kids of Kazim Adeoti and his wife,…

The deal was made after a meeting between the governor, members of the police, the Magodo Residents Association (MRA), and the Shangisha landlords at the government house on Wednesday, according to Gbenga Omotoso, Lagos commissioner for communication and strategy.

“The surveyor-general of Lagos state, permanent secretary lands bureau and Hon. Commissioner for physical planning and urban development are to immediately identify available plots of land within the Shangisha village scheme,” Omotoso said.

“Upon identification of available and accessible land, the state government is to immediately allocate the land to the 549 judgment creditors.

“Whilst this exercise is ongoing, the Nigeria police are to restrain themselves from any conduct or action that may instigate violence or breakdown of law and order in Magodo.

“They should be keepers of peace and act within the confines of the law – always. All the parties have agreed to an amicable resolution of the matter.”

The Magodo Residents Association (MRA), in a statement issued after the meeting with the governor, told residents to remain calm.

Mercy Aigbe: See the 3 kids of Kazim Adeoti and his wife, Nigerians react

Mercy Aigbe: See the 3 kids of Kazim Adeoti and his wife,…