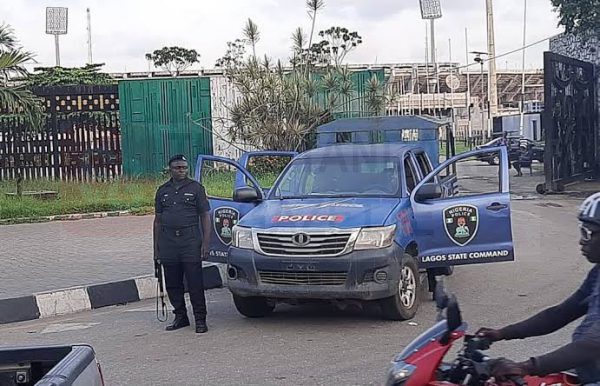 Ogun State Police Command have arrested one Abidemi Oluwaseun for allegedly invading a public school in Abeokuta with two thugs in a bid to attack a teacher for beating her daughter.

The incident occurred on Tuesday 12th of October 2021 at the Baptist Girls College, Idiaba, Abeokuta. Oluwaseun’s 15-year-old daughter was allegedly flogged, prompting him to invade the school premises with two other accomplices.

The two other thugs with him are; Fayesele Olabanji (25) and Alebiosu Quawiyu (24).

The attackers came into the school premises in an unregistered vehicle, armed with brand new cutlass and threatening to hack down a teacher of the school with the cutlass.

Acting on the distress call placed by the Principal of the school, he said the Divisional Police Officer, Kemta, CSP Opebiyi Sunday, mobilised his men and moved to the scene where the three men were apprehended right inside the school premises.

He added that the unregistered Toyota car and the cutlass were recovered from them.

During interrogation, the state police spokesman said Abidemi Oluwaseun confirmed hiring the other two men to the school to teach the teacher who flogged his daughter a lesson.

Meanwhile, the state Commissioner of Police, Lanre Bankole, has ordered that the suspects be properly investigated and charged to court as soon as possible.

He also warned that the command under his watch “will not tolerate such unruly behavior in any public or private institution, as such amount to taken laws into one’s hand.”

©Standard Gazette, 2021. Unauthorized use and/or duplication of this material without express and written permission from this site’s publisher is strictly prohibited. Excerpts and links may be used, provided that full and clear credit is given to Standard Gazette with appropriate and specific direction to the original content.
0 74
Share

How to win BBNaija – Whitemoney explains his winning formula

Woman, Rouphina Onyiliagha Narrates How Her Violent Husband Abused Her For Years