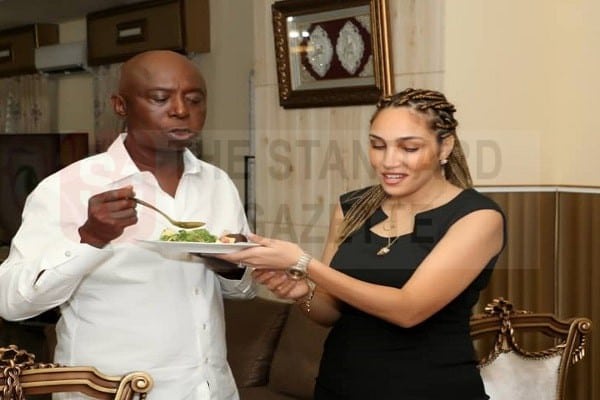 Ned Nwoko, a former member of the House of Representatives, has spoken up about his divorce from his Moroccan wife, Laila, detailing the reasons for their split.

Nwoko's media team also issued a statement on his Instagram page, dispelling rumours that his split was due to his use of a local aphrodisiac called 'Kayamata,' marketed by Hauwa Mohammed, commonly known as Jaruma.

Laila openly announced her divorce from the lawmaker in October. As a result, numerous fans accused Regina Daniels, Nwoko's actress wife, of using 'kayamata' to break up her husband's marriage to the Moroccan model.

Last month, Regina Daniels and Jaruma exchanged words as a result of this.

However, according to a recent statement from Nwoko's team, his marriage to Laila "devolved to irreconcilable difficulties rooted in Laila's indecent conduct, which began while she was on holiday in London."

The statement adds in part, “We note with a sense of responsibility that prince Ned Nwoko has nothing whatsoever to do with Jaruma products in relation to his cordial relationship with his actress wife, Regina Daniels.”

©Standard Gazette, 2021. Unauthorized use and/or duplication of this material without express and written permission from this site’s publisher is strictly prohibited. Excerpts and links may be used, provided that full and clear credit is given to Standard Gazette with appropriate and specific direction to the original content.
Share on Social Media
twitterfacebookwhatsapplinkedintelegram
Follow us on Social Media
twitterfacebookinstagramyoutubelinkedinwhatsappgoogle playtelegram
KayamataLailaNed NwokoRegina Daniels

For 6 years, Fani-Kayode was impotent, had children through artificial insemination - Precious Chikwendu