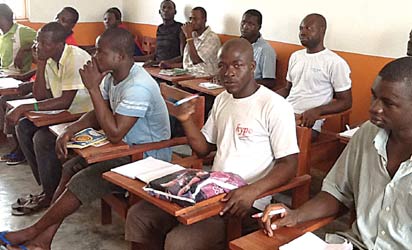 For long, so much has been said about the deplorable state of prisons in Nigeria, particularly the adverse health implications on inmates due to congestion. And successive governments have been accused of negligence instead of proffering lasting solution to this problem.

More worrisome is the fact that inmates get back into society hardened after serving their sentences, thereby frustrating security operatives’efforts to curb criminal acts in the society.

Irked by the development, the Nigerian Prison Service was renamed Nigerian Prisons and Correctional Service sequel to the Senate passage of a Bill for an Act to repeal the Prisons Act Cap, P29 Laws of the Federation of Nigeria, 2004.

According to the Bill, the name change is “to underscore the humane aspect of the reform focus of prisons administrations and to conform to provisions in the international instrument.”

The Senate also approved a recommendation that deleted the words ‘hard labour’ and replaced it with ‘prison labour’, as it noted that  “hard labour” was an inheritance from colonial era.

Crime Guard, Monday, visited the three prisons in Kirikiri area of Lagos comprising the Maximum, Medium and Female Security Prisons with a view to carrying out an assessment of the situation inside the walls of the prisons.

The first sight that greeted this reporter on arrival at the Maximum Security Prison was the neat environment and well- trimmed Lawn and Table Tennis courts, as well as a  football pitch, where inmates  come out in the evening for exercise and leisure.

Although facilities at  both the Maximum, Medium and Female Prisons hospitals were nothing to write home about compared to what obtains in government hospitals and elsewhere around the globe, but   Prisons medical officers, though not enough to take care of the inmates,  ensured they made do with what is available.

At the reference hospital of  Maximum Security prisons for instance, there were no less than 30 beds, a far cry when compared with the number of inmates who came for treatment on daily basis. At least, 100 inmates  reportedly  visited the hospitals daily.The hospital also takes care of Zone A prison comprising Lagos and Ogun states. There are also facilities for anti and post natal care. 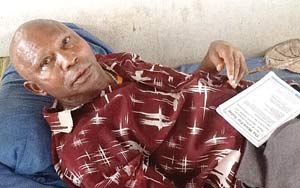 The common ailment among inmates, as observed during the visit, is malaria, high blood pressure and  skin infection which is rampant among inmates, particularly those  at the Medium Prisons.

But Dr Edwin Itemeson(Dr on duty) told Crime Guard  that the hospital was a referral hospital  and is well equipped for its day-to-day running.  He hinted that cases beyond their  scope were transferred to either  the Navy reference hospital or any of the government hospitals. However, there were two patients on admission at the Maximum Security prison; one of them, a  Condemned Convict CC,  said to have multiple problems ranging from asthma, inguinal scrota hernia, coupled with hypertension. The 68 year-old suspect  who was transferred from Abeokuta Prisons told this reporter  that  the treatment and adequate care he was receiving at the prison, kept him alive.

Dental section takes care of inmates’ dental cases. But some of the inmates, as gathered, also  have mental disorder. While some of them were said to have been brought into the prison in that state, others reportedly  developed it through depression. The psychologist  on duty explained that “basically, what we do here is to provide psychological intervention services for both inmates and staff. At times, doctors  do refer to us inmates that have psychological problems from other prisons  and we send those we cannot handle at our own level out. So far, its been so good. At other times,  psychiatrists come here to consult with them and when they do not have time, we take the inmates there. At other times, those with  bizarre cases were  advised to indulge in sporting activities”.

Life behind the prison walls can be likened to that outside the walls. But the distinctive difference is  freedom! Whereas inmates are confined to the prison’s vicinity with a high wall demarcating them from the outside world,  the freeman outside, on his part, has the privilege to move about at will.

Aside that, it was observed that every other thing such as sports,formal and informal education as well as vocational skills were also present in the prisons. More interesting, is the fact that fellow inmates with degrees from various fields were discovered to be teachers.

Kenya Forest Service plants more than 35000 trees across the…

An interesting case was that of a 68- year-old lifer, who reportedly used the opportunity to fulfill what he described as ‘a lifetime  dream’. According to the inmate who simply identify himself as Jonathan said:“I have always  dreamt of going to school. But I was deprived the opportunity because of the civil war. I later joined the Nigeria Police, in the course of which I misfired and killed someone. I was brought here in 1994. At first, I was slammed a  Condemned Convict verdict but later my case was heard and I was given a lifer.   In the course of moving on with my life, I decided to  actualize my dream by going to school here. I started right from primary 1  and today I am in JSS 2 and will complete my secondary education if I am not let out by then. In the face of all this, I am grateful that I am able to achieve a life time dream,” he said.

Aside the primary and secondary levels of education, there were also inmates attending the Open University. When Crime Guard visited, they were writing their examination.

Officer in charge of Welfare, Chukwuemeka Patrick, a Deputy Comptroller of Prisons, said the aim of  establishing the schools was to ensure total transformation  of the inmates.

“We coordinate all  activities such as  vocational and recreational, as well as  religious. As you  know, religion has a very big role to play in transformation.

In the school, we have primary and secondary units— which sees to the remedial aspects of their education—for those of them who never had the privilege of education before coming to the prison. Or those of them that dropped out as a result of their lifestyles out there  before they came to prison.  The school has been in existence for about 15 years. There is also a GCE centre that has been on for 10 years.

“Over the years, we have always recorded more than 90 per cent  success  in our GCE results. WAEC has  even given us commendation several times because of the work we are doing here.  In the course of time, we felt there was a need to take it a step further. That is why we came about  partnership and collaboration with Open University. And this university has been in existence for about seven years. We have inmates in different disciplines:Law, Criminology, name it… There is no discipline in  the conventional universities that  you do not find in the Open University here.

Before we even started the Open University, we had a JAMB centre,especially for those of them that were about to leave the prison. We started that JAMB centre so that they can take their JAMB here and as  they leave, they will go straight into the university without any break. It is just part of making sure that they do not fall into that former life style of theirs”, he said.

It was also learnt that prison authorities bear all the expenses in running these schools with assistance from Non Governmental organizations because of the limitation of budgetary allocation.

It was observed that even in prisons, inmates sometimes make choices on what to eat. For instance,  inmates at the Maximum  Security Prisons preferred their beans to be prepared in two different ways; beans pottage and ordinary beans without adding condiments. As for their eba, they reportedly prefer it   a little solid. But for the female inmates, eba  is a no-go area for them. Rather, they prefer semovita.

The most worrisome aspect is the congestion of these prisons owing to the increasing number of  awaiting trial persons. As at  the time of visit,  a total of  52,754 persons are reportedly in  prisons across the country. Out of this number, over 34,000  are awaiting trial, a development said to have posed problems to prisons officers in the area of transforming inmates.

With the foregoing, it was observed that the major factor militating against efforts by the Nigeria Prisons  to efficiently carry out their constitutional responsibility is the issue of congestion owing to the increasing number of Awaiting Trial persons.

“The major challenge  presently is that we have too much volume of awaiting trial inmates in majority of  the prisons in Nigeria, especially the urban prisons and  this has to do with the problem of Criminal Justice System.    It is only when the  population of awaiting trial inmates  reduces  that we will be able to  properly carry out the rehabilitation and reformation work on inmates. What you don’t understand is that it is difficult for a Prison officer to  train somebody who is awaiting trial in the prison, but he will  train those convicted  and sentenced.   As they come in, we ask them what they can do; tailoring, carpentry, laundry, gardening, woodwork and other vocations we have in the prison. Then we train them  by trying to associate them with whatever vocation they want to learn. But for the awaiting trial inmates, it is also morally unfair for somebody who is awaiting trial to be approached and say ‘will you like to learn a vocation?’ The guy as it is, will believe that he has not been proven guilty and will not be ready to succumb to learning any trade. He will just be ready for the court to call him for his case”, the  Nigerian Prisons national Public Relations Officer, Mr Kayode Odeyemi said.

Prison sources told Crime Guard that the continuous rise in the population of persons awaiting trial in prisons, in a sense, is traceable to ineptitude of the police and its allied agencies and office of the Director of Public Prosecution in the various states of the Federation.   These bodies, according the sources,  are constitutionally responsible for the prosecution of criminal cases in Nigeria.

It is regretful that some awaiting trial persons are victims of circumstances but then they deserve to be given fair trial within reasonable time; otherwise, it would be a case of human right violation.

The sources also disclosed that the use of adjournments is another tool usually employed by some members of the bar to delay justice, thereby causing a person to be committed into prison as awaiting trial inmate.
“Even though Prisons authorities are doing all they can to better the lots of inmates put in their care, it is imperative for  government and other concerned bodies to address the issue of awaiting trial persons.  The reform envisaged in this circumstance should be holistic and should extend to the assessment of the roles of police, courts and other related agencies in causing dilemma for the nation in the areas of management of the prison services and judicial administration,”one of the sources stated.

©Standard Gazette, 2021. Unauthorized use and/or duplication of this material without express and written permission from this site’s publisher is strictly prohibited. Excerpts and links may be used, provided that full and clear credit is given to Standard Gazette with appropriate and specific direction to the original content.
ImnatesKirikiriLagos StateNewsprisoners
0 23
Share

Jonathan orders restructuring of Office of the Head of Service

SERAP sues Buhari for spending N1.48 trillion on maintaining refineries with no crude…

How newly wed decided their last name at the altar by…

Teenager burnt to death for stealing motorbike in Auchi, Edo…

What the new anti money laundering bill signed by Buhari…