Opinion: What Is A Befitting Burial? Nigerian Christians Make It Complicated 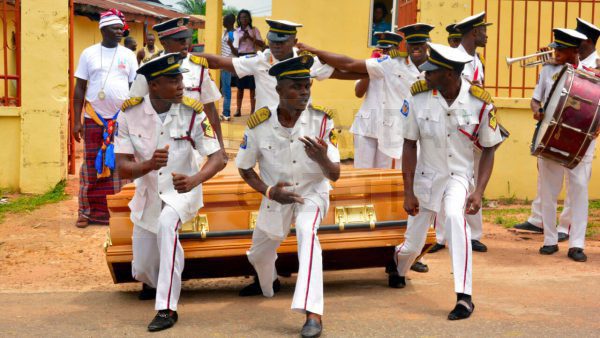 A few year’s back a 48 year old woman died and the next day when she was about to be buried, the family had gathered to contribute money for soft drinks and doughnuts to entertain those who would attend the burial. She was a 48 year old woman.

The way people were eager to lay their hands on the snacks in black nylon and the fact that they were jostling for their own share to take home and gulping it down right there got me thinking. Were they hungry? Are these people normal? I wasn’t surprised though. The bereaved family was acting to social stimuli, “what will people eat?” I have seen worse amongst us here in the Christian South. I have seen ‘omo oloku’, (children of the deceased), dancing to live music at their father’s funeral, a man who died aged 57, spraying money, claded in ‘aso ebi’ – 57-year old for goodness sake. Ha! I don’t know where we got this from, certainly not from the Bible I read.

Even when someone dies at age 100, we just devised a jaundiced view of burial in this part of the world. Biblically, in the laws of Moses, the dead body was never a thing to celebrate. It is not a body we drive around shaking with undertakers. Lev.21:11, Num.9:5-6, Num. 19:16. Those who touched the dead were said to have been defiled. In the New Testament brought to us by Christ, no one is defiled for touching the dead, but tagging the body of the dead as a rejected, filthy thing is a shadow of how God views our corrupted, mortal bodies and how needless it is as a perishing forbidden entity that houses the human spirit. It has no gain to God.

The death of someone irrespective of age, when things were normal, often comes with reflections, mourning and soberness. It doesn’t imply that the deceased is hopeless, but it was the right thing to do.

Culturally speaking, many cultures in ancient times set aside days for mourning depending on the status of the individual. For instance, Egypt declared 70 days to mourn Jacob, the father of their prime minister, Joseph (Gen 50:3). Israelites mourned for Aaron 30 days after his death (Num 20:29), David mourned for Saul a whole day (2Sam 1:12). It varies from time to time, culture to culture. It is not a law but it was normal.

The book of Ecclesiastes desribed the scene in a graphic manner; “While the sun, or the light, or the moon, or the stars, be not darkened, nor the clouds return after the rain:” Eccl. 12:2-5.

“In the day when the keepers of the house shall tremble, and the strong men shall bow themselves, and the grinders cease because they are few, and those that look out of the windows be darkened,

And the doors shall be shut in the streets, when the sound of the grinding is low, and he shall rise up at the voice of the bird, and all the daughters of musick shall be brought low;

Also when they shall be afraid of that which is high, and fears shall be in the way, and the almond tree shall flourish, and the grasshopper shall be a burden, and desire shall fail: because man goeth to his long home, and the mourners go about the streets:”

Burials were for reflections and served as a means to look at ourselves in retrospect. There was no where in the Bible where people danced and jostled for drinks when people died. It is a great abomination, detestable and unfortunate. The book of Ecclesiastes further affirmed;
“It is better to go to the house of mourning, than to go to the house of feasting: for that is the end of all men; and the living will lay it to his heart.” (Eccl. 7:2). That’s what burials are meant for. To show us and remind us of our end so we can lay it to heart and take life simple and amend our ways.

Do we need crowd and pull resources to feed a city to have a ‘befitting’ burial? The understanding of what constitutes a befitting burial is the real issue among my people. They believe it should be about crowd, the money, the package, which to them implies social acceptance. In fact, that was why Jesus Christ had to die on a Friday.

I once heard this mystery from Pastor Sunday Olabode Fakunle while in Ibadan. I went home to study more about it and I discovered that the solar eclipse that occurred on that day, the storms and the fact that it was in the afternoon of a Friday made it impossible for Jesus disciples and others to embalm his body or pour spices on him. The sabbath day was also approaching by 6pm and they were in a hurry to prepare for the Sabbath.

The law of Moses made it clear they would be unclean and hence, they had to hurriedly rush down Jesus from the Cross before 6pm. That was why he told the woman with the Alabaster box of fragrant oil to do it while he was with them because he knew that no one would do all those things on his body when he dies. He needed that body back intact because he was going to resurrect with it. It was a divine arrangement. God is an extraordinary strategist. He knew they could have turned that body into something else and hence, hinder the work of salvation entirely.

Anyone who has his/her family around, or close friends, associates, neigbors etc, to give dust to dust, and have them mourn for you has gotten a befitting burial. It is not in the cost of the casket, the crowd or the concert or Cubana-like burial. It is not until you call cooperative society, staff, church etc that makes a burial befitting. Why call people to come feast when they never added anything to the deceased? They don’t even know the person that died personally. Is this not the feast for the dead? If you have people who can cover your nakedness and put you six feet down below, you have a befitting burial. Moderacy is key.

Why will you not be at peace over someone you believe has gone to rest in peace?

©Standard Gazette, 2021. Unauthorized use and/or duplication of this material without express and written permission from this site’s publisher is strictly prohibited. Excerpts and links may be used, provided that full and clear credit is given to Standard Gazette with appropriate and specific direction to the original content.
0 16
Share FacebookTwitterGoogle+ReddItWhatsAppPinterestEmailFacebook MessengerLinkedin