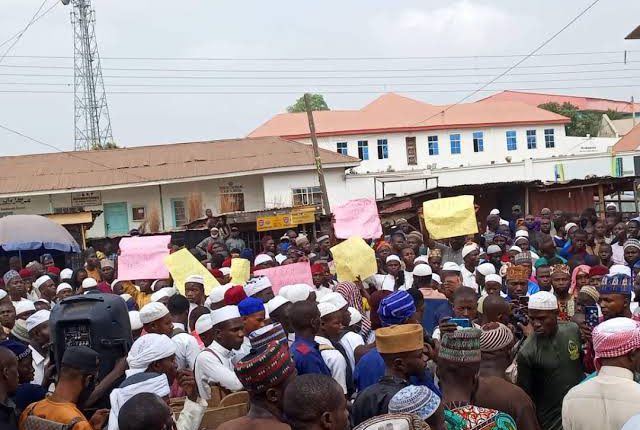 On Sunday, Muslims in Iwo, Osun State, held a peaceful demonstration against ritual killings in the community, calling on the government to ensure that anyone caught in the act was punished appropriately.

The protest began at the Iwo Central, with protestors carrying posters that read, among other things, 'Ritualists are not among alfas,' 'We condemn ritual killings in Iwo and surroundings,' and 'Islam is against ritualists,' among other things.

Shafi'i Bello, the Ameer of the Ansrul-Huda Islamic Organisation, led the demonstrators who assembled under the banner of the Coalition of Islamic Scholars and Organizations.

Islam, according to Bello, condones the shedding of human blood.

Sheikh Tajudeen Bilal, the NASFAT Missioner in Iwoland, spoke at the rally and condemned ritual killings, declaring that no real Muslim would engage in such crimes.

He asserted that suspected ritual killers who claimed to be Quranic scholars in the past were liars.

"This (ritual killing) has become prevalent among the wolves in sheep's clothing; those who are calling themselves alfas," Bilal remarked, lamenting the recurrence of ritual killings in the community.

©Standard Gazette, 2021. Unauthorized use and/or duplication of this material without express and written permission from this site’s publisher is strictly prohibited. Excerpts and links may be used, provided that full and clear credit is given to Standard Gazette with appropriate and specific direction to the original content.
Ondo StateProtestRitualistRitualist Alfas