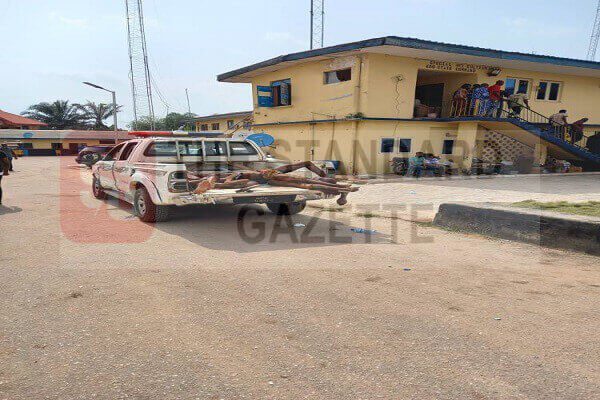 Three suspected armed robbers have been shot dead by a combined team of security agents drawn from the Police and the vigilante members in Benin city, Edo state.

The suspects began their operation at about 11 am on Tuesday. The Police received a distress call that some suspected hoodlums have snatched several cars around Airport road in Benin City, Edo State.

The heavily armed suspects attacked and robbed residents of Ebo, Irhirhi, Amagba and Iholor at a row for several hours.

During the operation, the suspects rammed into a businessman called “Julius” and shot him dead on the spot.

Julius, who was driving his car, wanted to escape but the suspects used their vehicle to barricade the road following which they caught up with him.

The Police and vigilantes went on their trail after residents contacted them concerning the escapades of the suspects.

When the businessman, Mr Julius, was shot dead, the Police and the vigilante members confronted the suspected gunmen.

Two of the suspects were killed while one of them was severely wounded.

The suspect who later died in the hospital said this before he gave up the ghost ” one of our members that died now called CY was the one who fired and killed the said Julius”. We have been looking for Julius to kill as we snatched this Toyota Camry car for the operation. I regret my action”.

Items recovered from them include English and locally-made cut-to-size guns.

Anambra Poll: I Will Be Governor With APC Ticket, Says Andy Uba