BARELY 24 hours after the Edo State Commissioner of Police, Mr Folunsho Adebanjo, met with party leaders in the state on the need to have a peaceful Local Government election come April 20, two persons including 80 year- old man, were shot dead while several cars and houses including that of the Chairman of Action Congress of Nigeria in Etsako Central Local Government Council, Mr Paul Osugbo were set ablaze during a clash between ACN youths and supporters of the Peoples Democratic Party (PDP) in Fugar, Etsako Central Local Government Council of Edo state. 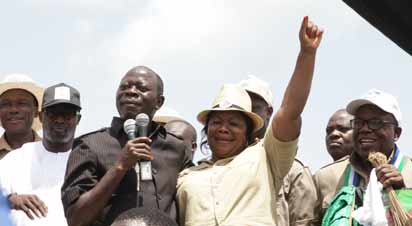 Governor Adams Oshiomhole of Edo State introduces the ACN candidate for the Chairmanship slot in Ovia North East Local Government Area during the party’s campaign for the April 20 Local Government Election in the state, Friday.

Over ten persons were said to have sustained serious injuries during the series of attacks that took place Wednesday midnight in Fugar the home town of the former Chief of General Staff, Admiral Mike Akhigbe and the Chief of Staff to the President, Chief Mike Oghiadohme. The Edo state chairman of the PDP, Chief Dan Orbih is also from the Council.

Meanwhile, the Edo CP Adebanjo who relocated to Fugar at about 2am Thursday morning, said two suspects have been arrested while others allegedly involved in the mayhem are being hunted by the police. The ACN chairmanship candidate in the council Mr Emmanuel Momoh was also said to have been invited by the police.

But few hours after his warning, Saturday Vanguard learnt that while ACN youths were on a campaign rally around Ward one, Iviewe, close to St Theresa’s Catholic Church, one Abraham who was driving a PDP bus allegedly rammed into the campaign train of the ACN youths and several persons were injured and were rushed to the hospital.

It was learnt that the father of the driver of the PDP bus was shot by irate youths who stormed their family house in search of the Abraham. The violence also led to the shooting of one Agabi Joachim said to be an ACN supporter, who died at about 11am yesterday after receiving a gun shot.

Also destroyed during the mayhem, were  six vehicles and the houses of the ACN Chairman in Etsako Central, Mr Osugbo, that of the councillorship candidate for Ward 3 Ofi Imhuaperamhe, ACN leader Chief Alemor’s car was vandalized too. An ACN leader Chief Igefoi and his wife equally received machete cuts.

Finance commissioners walk out of FAAC meeting in anger

What Next For WTO As Ngozi Okonjo Iweala Takes Over