Two persons alleged to have handcuffed and beaten two police operatives to stupor at Ogbe in Benin city, Edo state, have been arrested by the Nigerian Police.

On the 16 of August 2021, two police operatives serving with the Edo state police command had gone to effect the release of a relation who was apprehended by members of the Homeland security team, a vigilante group operating in the locality.

The situation led to a serious fight where the two police operatives were overpowered and given the beaten of their lives.

They were accused of being in possession of cannabis popularly called "Indian Hemp".

They were handcuffed and later handed over to the Department of State Service (DSS).

The DSS released the two police operatives as there was no substantial evidence of the alarm raised by the vigilante members. 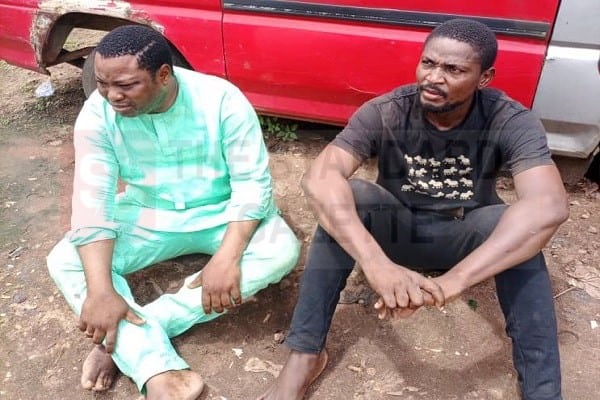 The policemen who sustained severe injuries were taken to the hospital for medical attention.

All the actions were recorded by the vigilante members and later posted on social media.

The video, however, went viral, forcing the police in Edo state to go in search of all those who were spotted in the video manhandling the policemen.

Two persons have now been arrested by the police.
They were identified as Ehanire Osahon and Joshua Momodu.

In the said video, Ehanire Osahon was said to have directly handcuffed the two policemen before other members of the vigilante descended on them.

In an interview, one of the suspects, Ehanire Osahon, told Standard Gazette that, "I was asked by my commander Mr Awilo to handcuff him. They were fighting us because we refused to release their brother. Awilo was surprised when the whole area suddenly became rowdy".

The two police operatives, Inspector Babansu Aliu and Sgt Blessing Otuaga, have since been discharged from the hospital.

In an interview, Inspector Babansu said, "immediately we arrived the area, the leader of the Vigilante group started shouting and said he would not release the boy.

The next thing, he ordered them to handcuff me and forced me into their guard room. I was almost killed. Till this moment, I am still coughing blood as I was hit strongly on my chest".

The second victim, Sgt Blessing Otunga, said, "the mob smashed my two eyes, and finally they handcuffed the two of us".

Contacted, Edo state Police Public Relations Officer, SP Bello Kontongs had earlier risen in defence of the two police operatives as he described the attack as unnecessary " and vowed to arrest the culprits.

©Standard Gazette, 2021. Unauthorized use and/or duplication of this material without express and written permission from this site’s publisher is strictly prohibited. Excerpts and links may be used, provided that full and clear credit is given to Standard Gazette with appropriate and specific direction to the original content.
Share on Social Media
twitterfacebookwhatsapplinkedintelegram
Follow us on Social Media
twitterfacebookinstagramyoutubelinkedinwhatsappgoogle playtelegram
Edo StateEdo VigilanteLocal Police