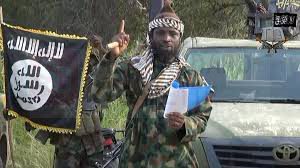 At a news conference conducted on Tuesday at the Command-and-Control Centre Maimalari Cantonment in Maiduguri, Mariam Dauda and Hauwa Joseph described their 8-year experience in the forest and how they were eventually rescued along with their infants.

Eight years have passed since 276 schoolgirls were kidnapped by Boko Haram militants from the Government Girls Secondary School in Chibok, Borno state.

The survivors stated that the Nigerian military had recently executed their spouses and that they had both given birth to children for the Boko Haram commanders they had been married off to for years.

Mary, who is now Mariam, responded to a news reporter's query by saying, "Yes, I know him; I used to see the late Abubakar Shehau.

She continued, “Yes, there are still other Chibok girls in the Sambisa Forest. They also have been married, at least more than 20 are still there,” she began to mention their names one after the other.

“I was 18 years old when they abducted us and I converted to Islam, I was Christian but they converted us to Islam and married us off.

“We thank God that we are finally out, we have suffered after our husbands were killed, life was hell for us. We sincerely thank the military for rescuing us.”

Major General Christopher Musa, who is in charge of the theater, credited the large-scale military operations in the Lake Chad, Mandara Mountain, and Sambisa Forest regions for the victory.

Musa mentioned that girls had been saved in Sambisa and vowed that they would not stop fighting for the release of the remaining kidnapped people.

The girls, who were rescued between June 12 and June 14, according to General Officer Commanding GOC Seven Division Nigerian Army Major General Waidi Shaibu, have received the necessary medical care and will be turned over to the proper authorities immediately.

©Standard Gazette, 2021. Unauthorized use and/or duplication of this material without express and written permission from this site’s publisher is strictly prohibited. Excerpts and links may be used, provided that full and clear credit is given to Standard Gazette with appropriate and specific direction to the original content.
0 19
Share

Man to wash public toilets for 8 months as punishment