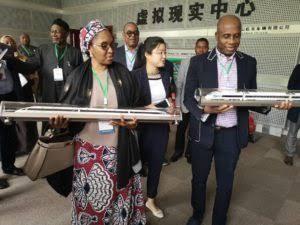 According to the minutes of a FEC meeting held on September 24, 2021, marked EC (2021)236, which was presided over by Vice-President Yemi Osinbajo and held while the President, Major General Muhammadu Buhari (retd.) was attending the United Nations General Assembly, Amaechi recommended that a firm, Mogjan Nigeria Limited, be awarded the contract worth N3.7 billion.

The company, which was founded by Prince Godwin Momoh, Chioma Momoh, and George Momoh on August 6, 2019, has a turnover of N84.9 million.

Recall that following the train bombing that killed at least eight people, Amaechi said he predicted the assault and offered a note to the Federal Executive Council (FEC) for the procurement of security equipment, but it was rejected.

The minister subsequently asked the council to “approve the award of contract for the procurement and installation of electronic surveillance system and interrogation unit on the Abuja (Idu)-Kaduna (Rigasa) 200km railway monitoring rail intrusion detection system and emergency response system in favour of Messrs Mogjan Nigeria Limited/Cagewox Dot Net Limited in the sum of N3,780,827,410.66 inclusive of 7.5 per cent VAT with a completion period of four months.”

Ministers in the council, on the other hand, questioned the firm's ability to deliver as well as Amaechi's refusal to provide adequate clarity on the equipment's capabilities.

"Some participants voiced worry about the quality of the memorandum because there was no description of the surveillance system concept note, brand name, country of manufacturing, or review by the prior user to enable them to make educated decisions," according to the minutes of the meeting obtained by The Punch.