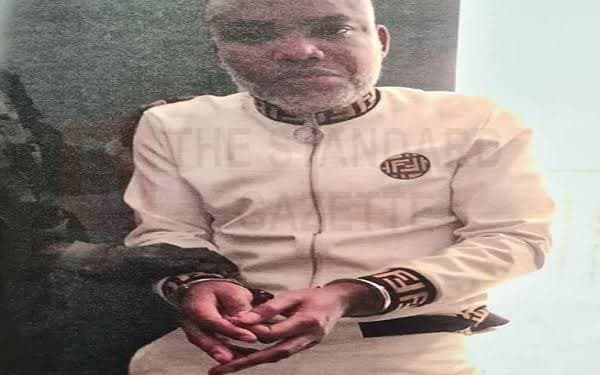 Leader of the proscribed Indigenous People of Biafra, IPOB, Nnamdi Kanu, on Tuesday, gave reasons why he absconded from court and escaped out of the country since 2017.

Kanu, who appeared in court in a black suit was re-arrested and brought back to Nigeria last Sunday. He told the Federal High Court in Abuja that he fled the country to save his life.

Speaking before Justice Binta Nyako, the IPOB leader said his disappearance was due to the unlawful invasion of his house by security agents, in an operation he said resulted in the death of many innocent people.

He said: “My lord, my house was invaded and people were killed. I would have been killed too if I had not hid myself. That was why I have been unable to attend court.

“I would have been killed the way others were killed when my house was invaded,” Kanu added.

©Standard Gazette, 2021. Unauthorized use and/or duplication of this material without express and written permission from this site’s publisher is strictly prohibited. Excerpts and links may be used, provided that full and clear credit is given to Standard Gazette with appropriate and specific direction to the original content.
0 19
Share FacebookTwitterGoogle+ReddItWhatsAppPinterestEmailFacebook MessengerLinkedin