Why Nnamdi Kanu’s Trial is Stalled 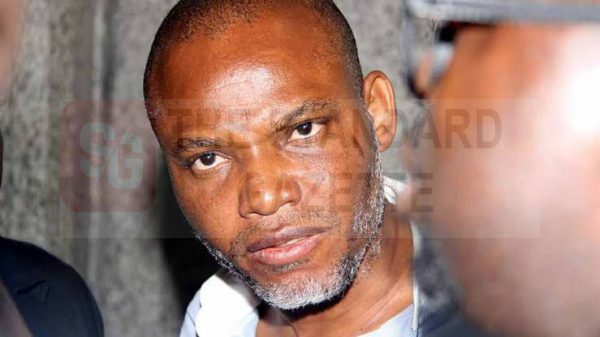 Leader of the the Indigenous People of Biafra (IPOB), Nnamdi Kanu’s trial was on Monday adjourned as the trial Judge, Justice Binta Nyako ruled that the failure of the federal government to bring Kanu to court in person meant that the court could not proceed with the trial.

She adjourned the case to October 21.

Nnamdi Kanu was arrested last month and extradited to Nigeria to face trial. He was remanded in the custody of the Department of State Services (DSS) after he was re-arraigned before the judge. The court did not grant Kanu’s request to be transferred to the Kuje correctional center from the DSS custody.

Speaking before the court on Monday, Ifeanyi Ejiofor, lead counsel for the defence, told Nyako that the DSS denied Kanu the right to meet with his relatives.

“I was informed authoritatively, I am speaking from the bar, that Nnamdi Kanu has been taken out of jurisdiction of this court,” he said.

“We have been denied access to Kanu in the last 10 days.

“We are worried about his safety and don’t know why the federal government’s refused to bring him in court.”

Kanu is facing charges which borders on treasonable felony brought against him by the federal government over his campaign for a ”Republic of Biafra”. The government also intends to add additional charges when the case resumes.

©Standard Gazette, 2021. Unauthorized use and/or duplication of this material without express and written permission from this site’s publisher is strictly prohibited. Excerpts and links may be used, provided that full and clear credit is given to Standard Gazette with appropriate and specific direction to the original content.
0 17
Share FacebookTwitterGoogle+ReddItWhatsAppPinterestEmailFacebook MessengerLinkedin