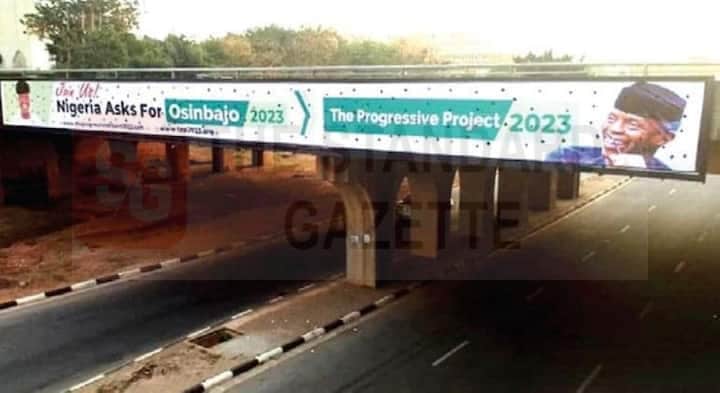 In Abuja, Nigeria’s capital city, a large billboard bearing the photo of Vice President Yemi Osinbajo and his name has appeared. The billboard was reportedly affixed to the top of a bridge in Abuja’s Central Business District.

The campaign banner had the inscription, “Join us, Nigeria asks for Osinbajo 2023″ with the name of a group, “The Progressive Project 2023” as sponsor the billboard.

While the presidential campaign billboard did not include a party name or insignia, it could be a clear signal that the vice president will run for president in 2023.

According to recent rumours, Vice President Yemi Osinbajo is considering running for President in 2023, though he has yet to make that declaration public.

Despite rumours that the APC’s national leader, Bola Tinubu, is also interested in the role, various support and pressure groups have continued to drum up support for the vice president’s apparent aspiration.

©Standard Gazette, 2021. Unauthorized use and/or duplication of this material without express and written permission from this site’s publisher is strictly prohibited. Excerpts and links may be used, provided that full and clear credit is given to Standard Gazette with appropriate and specific direction to the original content.
2023AbujaYemi Osinbajo
0 18
Share

Dominion Okoro, Four Others Arraign In Court Over The Murder Of Lucky Igbinedion’s Mother

How Fraudster Impersonated Commissioner to Sleep With 10 Ladies