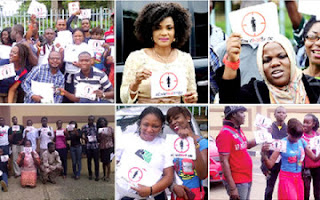 Massive protests have continued to trail the Senate’s passage of a resolution to retain the provision of Section 29 (4) (b) of the 1999 Constitution. Under the section, a married underage girl is deemed to be an adult.

Prominent Nigerians and human right organisations took to the social media to protest what they described as legalisation of sexual abuse of underage girls.

The  protests were held in parts of the country on Saturday such as Abuja and Lagos among others. Also, petitions were signed to protest the law.

The protesters might besiege all state Houses of Assembly and the National Assembly on Tuesday to call on the Senate to reverse itself.

Those who protested queried why underage Nigerians could not exercise their franchise at the poll but were being subjected to marriage at tender age.

On Twitter, several petition handles were created on Saturday, where users condemned  the Senate position.

Lagos-based pastor and motivational speaker, Sam Adeyemi, twitted, “If Islam permits something that the rest of the country and many parts of the world feel is detestable, then it’s a serious issue. We cannot take away from a Muslim the right to practice his/her religion.”

Two of the many tweets by a former Minister of Education, Dr. Oby Ezekwesili, read, “We kid ourselves to think that we can catch up and compete with the rest of the world, when the #GirlChild is constrained.

“I got married at 24, after my first post-graduate. Some think 24 is early but then, I was ready to make sound decisions.”

Nigerian actress, Omoni Oboli, also twitted, “I shudder to think I wouldn’t be who I am today, if some perverts had convinced my parents to marry me off before I turned 18.”

Nollywood actor, Nonso Diobi, stated, “If she can’t vote, then she can’t marry. A female child should be taken to the classroom, not labour room.”

Broadcaster, Mo Abudu, expressed her concerns, saying, “My heart is broken by the news from the Senate on #ChildBrides. This is not the Africa of 2013.”

Eme Ewa of Change.org, an organisation described as the world’s biggest petition platform, has written an online petition to the United Nations, titled, ‘United Nations: Stop The Nigerian Senate From Making Under-Age Marriage The Law!’

IS TONTO DIKE STILL IN LOVE WITH INYAYA? SEE HER REPLY TO INYAYA