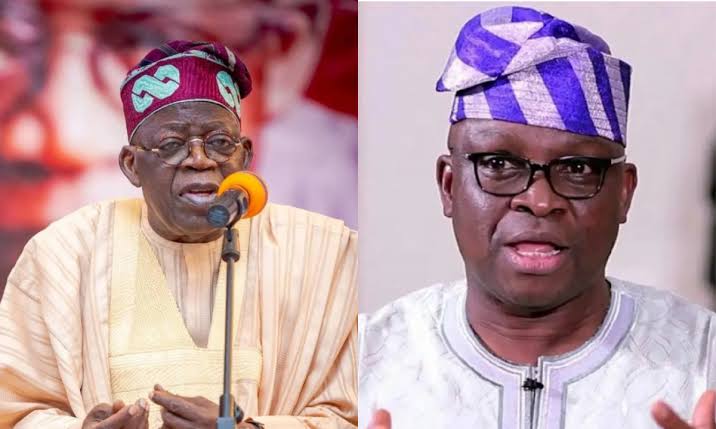 Sex Toy Senator is an embarrassment, he should keep quiet on…

What Tambuwal Discussed With Obasanjo During Abeokuta Visit

Tinubu, a presidential candidate and member of the All Progressives Congress (APC), told delegates in Abeokuta, Ogun's capital, that Buhari would not have won the presidential election in 2015 if it had not been for him.

Nigerians reacted to the remark in a variety of ways, depending on how they felt about the conditions preceding the 2015 elections.

In a statement released on Monday, the president stated that millions of people — not one person — backed Buhari to win the election.

In the letter on Monday, Fayose said his views are from the perspective of a Yoruba man and not as a politician, adding that “I equally wish to state that I am not an APC man and will never be”.

“I am writing based on my observed views and the attached possible dangers about your good self against tomorrow,” the letter reads.

“I equally read the reactions of your political allies both in the North and in the South. The reactions gave me great cause for concern for you and your life. Again, I see danger!

"As a knowledgeable student of history whom you are; our great late sage, Chief Obafemi Awolowo and the celebrated winner of the June 12, 1993, general election; Alhaji Moshood Kashimawo Olawale Abiola, were led to the Golgotha by self-acclaimed “champions of democracy.” I am sure the same people may advise you to ignore my advice.

“Going by the handwritings that are now clearly on the wall, if I may comment sir, I see you as one that may be swimming against the political tide of the cabal in your party. They are equally preparing for your actions and reactions and are fully set to contain the same as they did to both Awolowo and Abiola.

“Unfortunately, your kingdom has been badly balkanized if what happened in Abeokuta is anything to go by.”

Fayose, therefore, advised Tinubu to consider a verse in the Bible — “Proverbs 22:3” — which states: “Sensible people will see trouble coming and avoid it but unthinking people will work into it.”

©Standard Gazette, 2021. Unauthorized use and/or duplication of this material without express and written permission from this site’s publisher is strictly prohibited. Excerpts and links may be used, provided that full and clear credit is given to Standard Gazette with appropriate and specific direction to the original content.
Facebook0
Twitter0
Whatsapp0
Google+
Pinterest0
Linkedin0
DiggDigg0
Tumblr0
Stumbleupon
VKontakte0
Reddit0
Delicious0
Weibo0
Xing0
Print0
E-mail0
Total
0
Ayo FayoseBola TinubuOgun State

Why Nigerians will vote for APC in 2023 - Fashola

Atiku blows hot on Tinubu; says 'unlike him, I have certificates'

Oyetola ready to win from the court, gets 50 lawyers against Adeleke - Lawyer