A fugitive on the most-wanted list of the U.S. and Kenyan authorities arrested 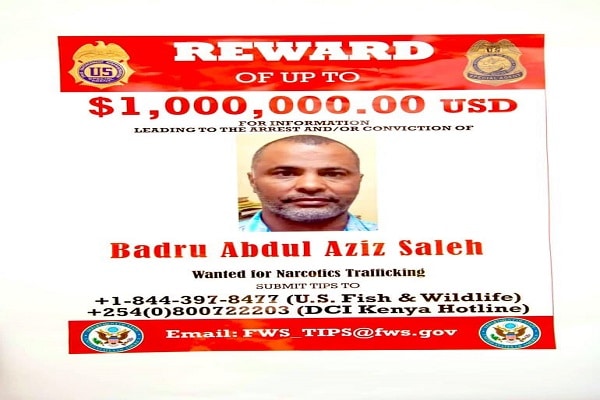 Following last week's announcement of a reward of $ 1 Million for the arrest of two most wanted suspects in the United States, one of them, Badru Abdul Aziz Saleh, has been arrested.

According to a U.S. federal indictment, in or about August 2018 through May 2019, Saleh and others who were identified during a wildlife trafficking investigation conspired to distribute at least 10 kilograms of heroin to a buyer in New York.

After several meetings, Saleh and his co-conspiratorscoconspirators delivered the first kilogram of heroin to a buyer in Nairobi, Kenya.

According to the indictment, in June 2019, Saleh fled from law enforcement and his co-conspirators before completing the remaining heroin transaction. DCI detectives subsequently arrested him for drug trafficking in Kenya on July 11, 2019, and arraigned him at the Jomo Kenyatta International Airport Law Courts a day after.

During Saleh's judicial process in the country, he was released on Sh200,000 bail. Saleh disappeared and became a fugitive, with a warrant for his arrest being issued.

In June 2021, following a joint investigation of the U.S. Fish and Wildlife Service (USFWS) and the Drug Enforcement Administration (DEA), a federal grand jury in the Southern District of New York, returned an indictment charging Saleh and other co-conspirators with conspiracy to distribute and possess with intent to distribute one kilogram or more of heroin, which carries a mandatory minimum sentence of 10 years' imprisonment.

"His arrest is as a result of our outstanding relationship with members of the public who provided information regarding the fugitive's whereabouts, days after the joint briefing at DCI headquarters," said the Directorate of Criminal Investigations (DCI).

©Standard Gazette, 2021. Unauthorized use and/or duplication of this material without express and written permission from this site’s publisher is strictly prohibited. Excerpts and links may be used, provided that full and clear credit is given to Standard Gazette with appropriate and specific direction to the original content.
FugitiveKenyaU.S.