Cops on patrol save man's life from irate motorcycle riders 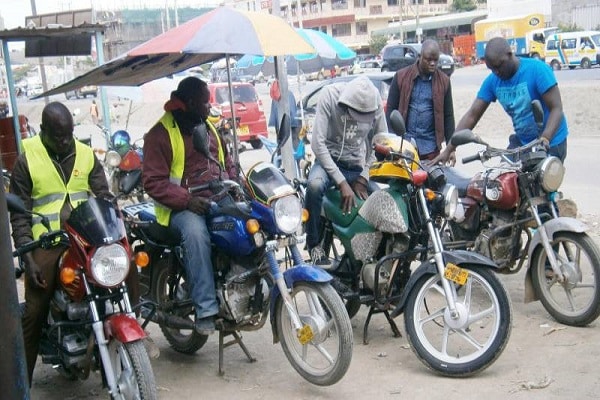 A robbery with violence suspect is lucky to be alive after escaping the wrath of irate motorcycle riders following two robbery incidents in Lari, Kiambu county, central Kenya.

Paul Gaitho, 26, was saved by police officers from a mob baying for his blood.

Earlier, Gaitho and an accomplice who escaped the attack narrowly had snatched two mobile phones from unsuspecting victims, a woman and a man, who were walking along the road at Lari's, Mathore market.

The two on a motorbike then sped off, leaving their last victim Patrick Kamau, wailing in distress.

This attracted the immediate attention of the riders at a nearby shed.

"In their characteristic manner and style, a scuffle would ensue as over 5 bikes would dash towards anyone demonstrating signs of needing their services. The first to engage the passenger successfully would win his trip," said the Directorate of Criminal Investigations.

After around 300 metres of a chase, the two thugs, scared by the reverberating noise of over 20 bikes breathing down their necks, jumped from their ill-fated bike, opting to escape on foot instead.

One of them managed to escape in the midst of traders selling their wares as his accomplice tumbled by the roadside and lifted his arms and legs up in surrender, begging for mercy.

What followed from the unforgiving riders was a barrage of blows and kicks as they administered instant street justice to the man, accusing him and his accomplices of using motorbikes as their gateway means, thus giving their trade a bad reputation.

But the quick action by general duty police officers from Lari police station saved the man's life, even as the angry riders implored the officers to let them kill the thug.

Two mobile phones stolen from the victims were recovered, as the motorbike used by the thugs and whose registration number had been defaced was impounded by the cops and towed to Lari police station.

A manhunt for the suspect who escaped is currently ongoing.

©Standard Gazette, 2021. Unauthorized use and/or duplication of this material without express and written permission from this site’s publisher is strictly prohibited. Excerpts and links may be used, provided that full and clear credit is given to Standard Gazette with appropriate and specific direction to the original content.
Facebook0
Twitter0
Whatsapp0
Google+
Pinterest0
Linkedin0
DiggDigg0
Tumblr0
Stumbleupon
VKontakte0
Reddit0
Delicious0
Weibo0
Xing0
Print0
E-mail0
Total
0
copsLifeManMotorycleridersthugs