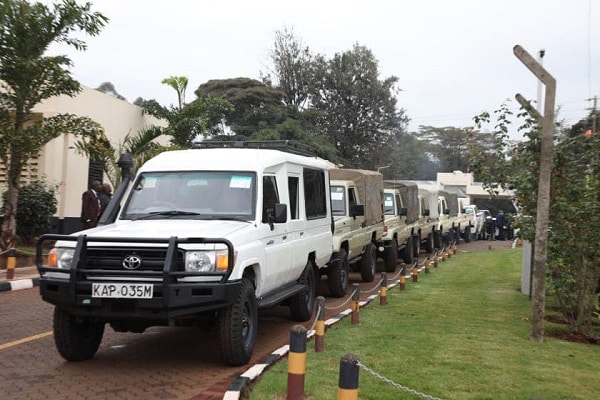 On Tuesday afternoon, the Director-General of Criminal Investigations, George Kinoti, received 32 rehabilitated police vehicles that had previously been declared unserviceable and un-roadworthy.

Following mobility challenges experienced by the Directorate, the director-general had in August last year ordered that all vehicles which had been grounded and were due for disposal via public auction be repaired immediately.

As a result, 32 vehicles to be disposed of as junks were identified in different police stations across the country and towed to local garages, where they were given a new lease of life.

The vehicles, which cost a total of Sh9.4 million to repair, saved taxpayers millions of shillings that would have been used to purchase new vehicles, with the average cost of a new Toyota land cruiser being Sh5 million.

"Had these vehicles been disposed via public auction, none would have fetched the government more than Sh50,000. We have repaired each of them at an average cost of Sh300,000, making a huge saving of Sh4.7 million for each new vehicle that the government would have bought," said Kinoti while receiving the vehicles.

"A total of Sh150 million that would have been used to buy 32 new vehicles has been saved, giving Kenyans value for money," he added.

While flagging off the vehicles to different stations across the country, the director-general urged officers to take good care of them and utilize them in efficient and effective service delivery to Kenyans.

©Standard Gazette, 2021. Unauthorized use and/or duplication of this material without express and written permission from this site’s publisher is strictly prohibited. Excerpts and links may be used, provided that full and clear credit is given to Standard Gazette with appropriate and specific direction to the original content.
dcidilapidatedGeorge Kinotivehicles

Another one bites the dust as Edo police kill alleged robber in Ugbor, GRA