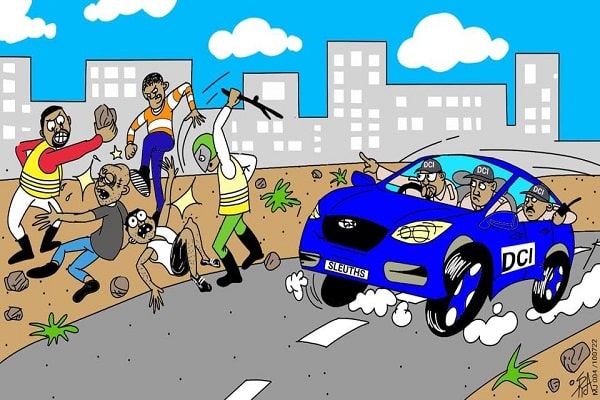 Detectives on Friday saved two robbers from the jaws of death from the wrath of an angry mob that almost lynched them in Kasarani, outskirts of Nairobi.

In a statement, the Directorate of Criminal Investigations said the thugs had snatched a mobile phone and a handbag from a middle-aged woman walking home in the Seasons area in Kasarani.

In the ensuing melee, the woman raised the alarm attracting the attention of motorcycle riders who were metres away.

Following the incident, the riders immediately roared their bikes to life and gave chase after the two thugs who took flight towards the Hunters area.

"The chase didn't last long as the bikes caught up with the miscreants a few metres away, with the leading bike man identified as Jonte jumping from his speeding bike and landing on the ground with one thug.

The remaining thug was floored a few steps away after another rider went for his neck, almost choking the life out of him.

What followed was a severe beating for the two. Luckily for the thugs, police officers came and rescued them from the wrath of the angry mob.

The lady who had been attacked earlier got her mobile phone and handbag back as the thugs were bundled into the waiting vehicle to face justice in a court of law.

Meanwhile, the police cautioned the public members against taking the law into their hands.

©Standard Gazette, 2021. Unauthorized use and/or duplication of this material without express and written permission from this site’s publisher is strictly prohibited. Excerpts and links may be used, provided that full and clear credit is given to Standard Gazette with appropriate and specific direction to the original content.
dcithugs

Two suspected cultists arrested, one shot on the foot in Benin