Firearm Stolen From A Police Officer Recovered In Kakamega 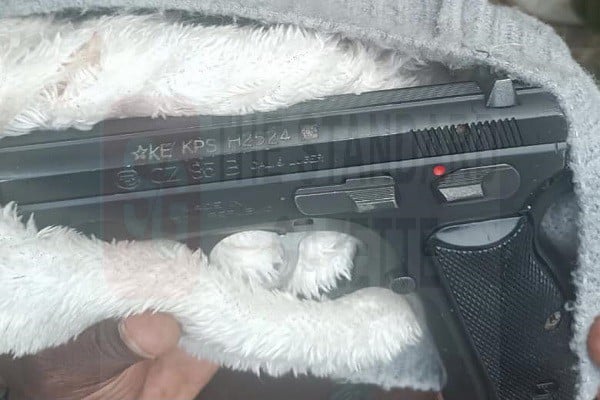 Detectives based in Kakamega town, Western Kenya, have recovered a firearm suspected to have been stolen from a police officer.

The Ceska pistol loaded with 15 rounds in 9mm calibre was recovered from three suspects who were holed at a house following an intensive crackdown mounted by the DCI Western command on criminals and criminal gangs in the area.

"Following the evening raid, Joseph Maina, 22, Dennis Githae, 25, and Stanley Githae, 20, were arrested and household goods suspected to have been stolen in various robbery incidents within Kakamega recovered," said the Directorate of Criminal Investigations (DCI).

The items included laptops, smartphones, television sets, and home theatres, among other electronic items and kitchenware.

The arrest of the trio and recovery of the firearm comes hours after yet another successful security operation that led to the arrest of 14 members of a notorious outfit that has been terrorizing residents with reckless abandon.

Earlier, detectives had received actionable intelligence regarding the suspects who immediately went into hiding when they heard that an operation to flush out criminals from the county had reached a crescendo.

The suspects are currently being held behind the bar pending arraignment in court.

Meanwhile, the recovered firearm shall be forwarded to the Ballistics section of the DCI National Forensic Laboratory for examination and further analysis of its involvement in previous scenes of armed attacks.

©Standard Gazette, 2021. Unauthorized use and/or duplication of this material without express and written permission from this site’s publisher is strictly prohibited. Excerpts and links may be used, provided that full and clear credit is given to Standard Gazette with appropriate and specific direction to the original content.
CriminalsdetectivesfirearmKakamega
0 12
Share

Why long queues are back in filling stations