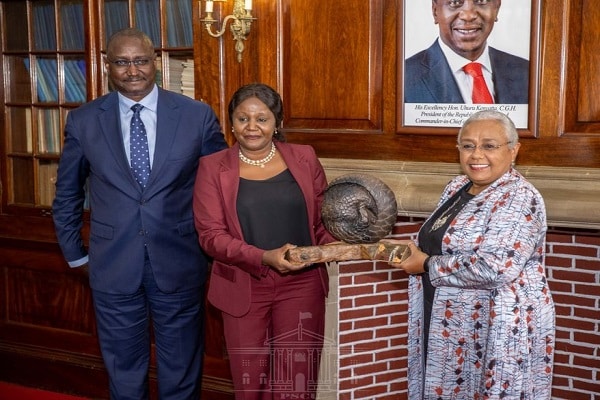 Photo courtesy of the Office of the First Lady

First Lady Margaret Kenyatta has assured of her commitment to supporting efforts geared towards conserving and protecting pangolins, some of the most endangered animals in the world today.

The First Lady emphasized that her support for conservation efforts will not stop at protecting pangolins but will extend to all wildlife.

The First Lady spoke on Tuesday, June 7, 2022, when she met a team dedicated to protecting and conserving pangolins through an initiative dubbed 'Pangolin Project', which paid her a courtesy call at State House Nairobi.

"I want to assure you that you have my support, and I will say Hands-off our Pangolin," she said.
The team, which included the Director of the Pangolin Project, Dr. Claire Okell, was led by Tourism and Wildlife Principal Secretary Zeinab Husein and Kenya Wildlife Service (KWS) Director-General Brigadier (Rtd) John Waweru.

First Lady Margaret Kenyatta, who is also the patron of a Kenyan anti-poaching campaign, namely "Hands Off Our Elephants", commended the Pangolin Project initiators for their commitment to conserving wildlife.

The team presented the First Lady with a sculpture of a pangolin moulded by artists who have dedicated their talents to creating pieces that generate funds to protect the species.

The Pangolin Project gifted the sculpture to Kenya Wildlife Services as a symbol of the collaborative commitment to protecting even the most vulnerable wildlife species.

British Deputy High Commissioner to Kenya Josephine Gauld commended the First Lady for her conservation efforts, noting that a sister sculpture is currently on display at Number 10 Downing Street in the United Kingdom.

She pointed out that British Prime Minister Boris Johnson is also a champion of wildlife conservation and is keen on supporting efforts aimed at curbing the illegal trafficking of pangolins.

"I must give full credit to KWS and the Pangolin Project. Our Prime Minister is also a champion of wildlife conservation, and he has a keen interest in combating the crime," she said.

Wildlife Principal Secretary Ms Zeinab Hussein and the KWS Director General Brig. Waweru briefed the First Lady on conservation efforts undertaken by the ministry, noting that the country has experienced growth in the number of elephants for the first time in many years.

The Principal Secretary stated that the country has witnessed a growth in the elephant population for the last three years besides having zero poaching of rhinos.

She added that her ministry was keen on raising awareness of the importance of conserving pangolins.

©Standard Gazette, 2021. Unauthorized use and/or duplication of this material without express and written permission from this site’s publisher is strictly prohibited. Excerpts and links may be used, provided that full and clear credit is given to Standard Gazette with appropriate and specific direction to the original content.
ElephantsMargaret KenyattaPangolins