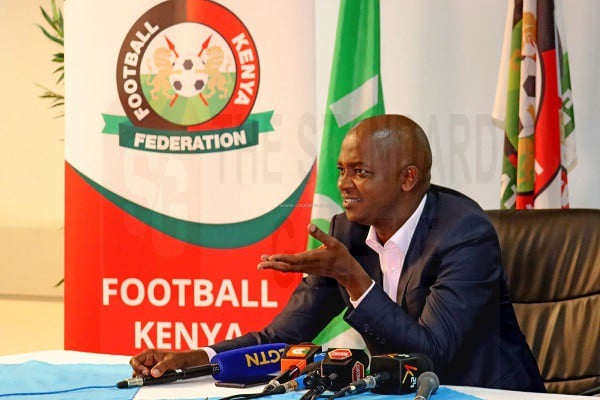 Mwendwa reported to the offices based in Kasarani, outskirts of Nairobi, accompanied by FKF CEO Barry Otieno and other officials.

The new development comes a week after Mwendwa wrote to Fifa President Gianni Infantino, informing him that he has resumed his role as the President of Kenya's football federation.

"Reference is made to my letter dated November 29, 2021, with regard to the interim transfer of my powers and responsibilities as FKF President to the FKF Vice President.

"In this regard, following the withdrawal of charges by the Directorate of Public Prosecution on July 8, 2022, I hereby wish to inform your good office that I have resumed my duties as the FKF president, with immediate effect, in accordance with Article 42 of the FKF constitution (2017)," read part of the letter.

Last November, Sports Cabinet Secretary Amina Mohammed ejected Mwendwa and his team from the office over graft allegations. He was accused of abuse of office and misappropriation of funds.

Amina later formed a caretaker committer to run the football matters in the country, forcing the world football governing body FIFA to suspend Kenya from participating in international matches.

©Standard Gazette, 2021. Unauthorized use and/or duplication of this material without express and written permission from this site’s publisher is strictly prohibited. Excerpts and links may be used, provided that full and clear credit is given to Standard Gazette with appropriate and specific direction to the original content.
Share on Social Media
twitterfacebookwhatsapplinkedintelegram
Follow us on Social Media
twitterfacebookinstagramyoutubelinkedinwhatsappgoogle playtelegram
Amina MohammedFifaFKFNick Mwendwa