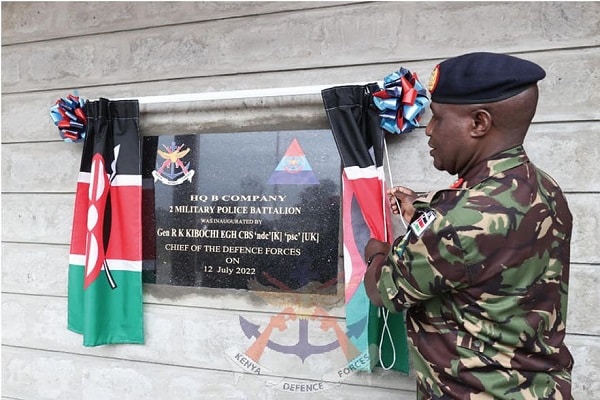 Photo courtesy of the KDF

The completion of the projects are part of KDF's modernization efforts.

While at the Garrison, the CDF also led the groundbreaking ceremony for a modern Defence Forces Canteen Organization (DEFCO) shopping mall, which will serve KDF families in the vicinity of the Garrison.

The function was attended by DEFCO Management Board, Officers, Service Members, and their families.

After that, General Kibochi inspected ongoing projects' progress, including the construction of the Headquarters for the School of Electrical and Mechanical Engineering (SEME) and the Defence Forces Constabulary (DFC).

The CDF reiterated the importance of the projects in sharpening the arrowhead by providing a standardized working environment and a well-coordinated welfare system, which will ultimately contribute to the overall morale of KDF personnel.

©Standard Gazette, 2021. Unauthorized use and/or duplication of this material without express and written permission from this site’s publisher is strictly prohibited. Excerpts and links may be used, provided that full and clear credit is given to Standard Gazette with appropriate and specific direction to the original content.
General Robert KibochiKDFKenya Army Corps of Signalmodern Defence Forces Canteen Organization