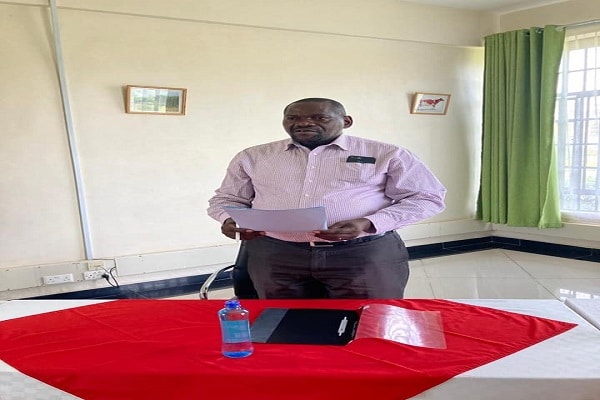 Environment and Forestry PS Dr. Chris Kiptoo has reiterated the importance of national cohesion and values and integration devoid of discrimination, especially in delivering the Ministry's mandate.

Dr. Kiptoo reiterated the importance of cohesion and national values taking cognizance of the diversity of our country in terms of ethnicity, cultural and religious backgrounds.

"The government is committed to promoting national cohesion, values and principles of governance that should be institutionalized in all sectors of the economy to spur national economic development", the PS affirmed.

The PS spoke on Tuesday in a speech read on his behalf by the Director of Planning, Mr. John Olela, during the official opening of a training workshop on the "National Cohesion, Values and Principles of Governance" held at the KALRO Resource Centre in Naivasha.

While appreciating the critical role of national cohesion and values, the Dr. Kiptoo said that the workshop could not have come at a more opportune time than now when the country was supporting COVID 19 recovery initiatives and as the country prepares for the general elections schooled for 09th August 2022, where peace, national cohesion, values and tolerance are paramount.

PS Kiptoo acknowledged the government's commitment to inculcate national cohesion and values as demonstrated in the National Cohesion and Integration Act No. 12 of 2008, reviewed in 2012, that demands embracing harmony.

He urged the Committee to take the training seriously to effectively impart lessons learnt to the rest of the staff, adding that national cohesion and values present a conducive environment for peak performance at the workplace.

©Standard Gazette, 2021. Unauthorized use and/or duplication of this material without express and written permission from this site’s publisher is strictly prohibited. Excerpts and links may be used, provided that full and clear credit is given to Standard Gazette with appropriate and specific direction to the original content.
Share on Social Media
twitterfacebookwhatsapplinkedintelegram
Follow us on Social Media
twitterfacebookinstagramyoutubelinkedinwhatsappgoogle playtelegram
CohesionDr. KiptooGovernmentValues

Kenya Flags Off First Consignment Of Tea To Ghana

Police Officer In Court Over 13 Tones Of Sandalwood