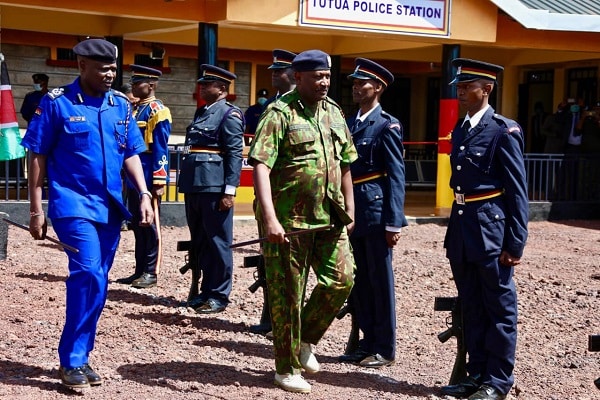 The Inspector General of Police, Hillary Mutyambai, on Friday presided over the launch of a new police post in Tutua, Buuri sub-county in Meru, Eastern Kenya.

A modern police station built by President Uhuru Kenyatta was unveiled to replace a dilapidated wooden structure that had been serving as the area patrol base.

The new station, which has modern features and amenities, including facilities for women and children, was constructed following consultations between the local community members and the Director General of Criminal Investigations, George Kinoti.

While making his remarks, the Inspector General noted that the new station would now serve public members much better, adding that a sufficient number of police officers had been posted to the station to effectively manage crime in the area.

Meanwhile, Mr. Kinoti thanked his excellency, President Uhuru Kenyatta, for delivering on the project and rallied the community members to work closely with the local security agencies as the surest way of ensuring that their public safety and security are guaranteed.

©Standard Gazette, 2021. Unauthorized use and/or duplication of this material without express and written permission from this site’s publisher is strictly prohibited. Excerpts and links may be used, provided that full and clear credit is given to Standard Gazette with appropriate and specific direction to the original content.
Facebook0
Twitter0
Whatsapp0
Google+
Pinterest0
Linkedin0
DiggDigg0
Tumblr0
Stumbleupon
VKontakte0
Reddit0
Delicious0
Weibo0
Xing0
Print0
E-mail0
Total
0
Hillary MutyambaiIGPolice stationTutua