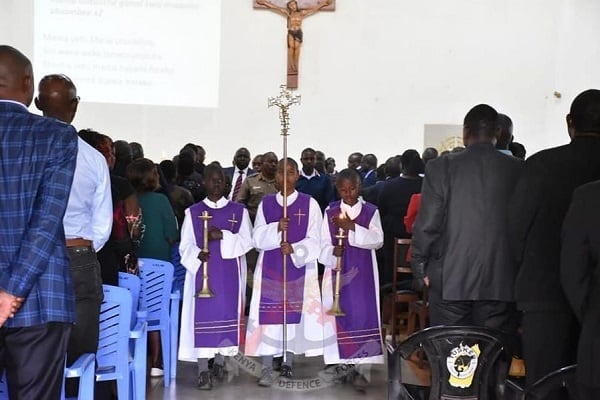 The late Col Waweru was a well-seasoned pilot and instructor who passed away on 26th September 2022 after collapsing in his car along Juja road, Eastleigh. He was pronounced dead on arrival at Aviation Hospital MAB.

The Mass was led by 2nd Lieutenant (Fr) Stephen Kogo Mwangi, who shared a message of encouragement to the family and friends, describing Col Waweru as a friendly and down-to-earth person.

Family representatives read tributes for the late Col Waweru. Mrs. Caroline Makele, a wife to the late Col Wareru, described him as a caring, brilliant, and loving husband.

Father Attempts To Kill His Four Children Before Taking Own…

"Even at his lowest, he was the best husband. I have lost the love of my life," she mourned.

On behalf of the Kenya Defence Forces fraternity, the Chief of Defence Forces described the late Colonel Flavian Wareru as a person who distinguished himself as loyal, selfless, devoted, and disciplined.

"It is not only a loss to the family and KDF but also the Nation," the CDF noted.

©Standard Gazette, 2021. Unauthorized use and/or duplication of this material without express and written permission from this site’s publisher is strictly prohibited. Excerpts and links may be used, provided that full and clear credit is given to Standard Gazette with appropriate and specific direction to the original content.
Bernard WaliaulaCaroline MakelecatholicFalavian WawerufamilyJohn OmendaKDFKenya Air ForceMoi Air BaseNairobiPeter GithinjiRequiem massRobert KibochiStephen Kogo MwangiWife
0 16
Share

Father Attempts To Kill His Four Children Before Taking Own Life

Father Attempts To Kill His Four Children Before Taking Own…