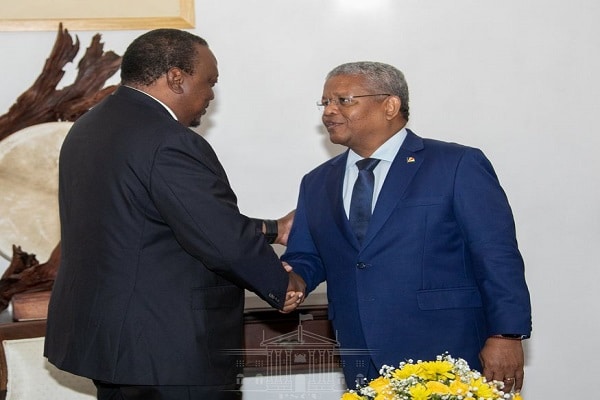 Kenya and Seychelles on Monday signed a record 10 agreements to cement the historical cordial diplomatic relations the two countries have enjoyed since they became independent.

President Uhuru Kenyatta and his host President Wavel Ramkalawan witnessed the signing of the pacts at State House, Victoria, in the Indian Ocean island nation of Seychelles.

Also signed was the Memoranda of Understanding (MOUs) for cooperation on peace, security, and law enforcement at sea and maritime affairs.

Addressing the press after witnessing the signing of the agreements, President Kenyatta said he has resolved with his host President Ramkalawan to further cooperate on, among other areas, matters of peace and security, especially on marine security.

"Seychelles is a leading champion of the blue economy. We have, in that regard, agreed to strengthen our collaboration in protecting and ensuring sustainable utilization of our ocean resources," President Kenyatta said.

President Kenyatta commended the Joint Cooperation Committee (JCC) of the two nations for putting together the agreements that were signed, which outlined the avenues to be explored to enable Kenya and Seychelles to fully maximize and further solidify their existing ties.

On his part, President Ramkalawan said President Kenyatta's visit to Seychelles was significant to the two countries as it reaffirmed the multifaceted relations the two nations have enjoyed over the years.

"Kenya and Seychelles had substantial bilateral cooperation in fields such as education, health, trade, agriculture, civil aviation as well as strong people-to-people ties even before the establishment of diplomatic relations on 10th January 1990," President Ramkalawan said.

He expressed gratitude to the Kenyan Government for its continued support of Seychelles's socio-economic growth, saying currently, 846 Kenyans are living in the country, among them several expatriates in the education and health sectors.

"I have expressed my gratitude to President Kenyatta for the assistance provided by the 50 Kenyan health workers who were recruited by the Ministry of Health in March 2020 following the outbreak of the Covid-19 pandemic. I have reiterated my appreciation to him for the contribution of Kenyan teachers to our education system," President Ramkalawan said.

Fielding questions from the press, the two leaders said by working together, the two countries would create huge opportunities for their citizens, especially in the blue economy and tourism sectors.

Other bilateral pacts signed included a Defence Cooperation Agreement and another on Mutual Legal Assistance in Criminal as well as MOUs on tourism development and bilateral cooperation in agriculture, livestock, and cooperative sectors.

Also signed were MOUs on cooperation in the field of sports and promotion of partnership on gender equality and women economic empowerment.

President Kenyatta pointed out that with genuine and strong partnerships, Africa can create a better future for its people.

©Standard Gazette, 2021. Unauthorized use and/or duplication of this material without express and written permission from this site’s publisher is strictly prohibited. Excerpts and links may be used, provided that full and clear credit is given to Standard Gazette with appropriate and specific direction to the original content.
Facebook0
Twitter0
Whatsapp0
Google+
Pinterest0
Linkedin0
DiggDigg0
Tumblr0
Stumbleupon
VKontakte0
Reddit0
Delicious0
Weibo0
Xing0
Print0
E-mail0
Total
0
AgreementsKenyaSeychellesUhuru KenyattaWavel Ramkalawan

Osun Poll: Is this a litmus test for the 'Obidients'movement?