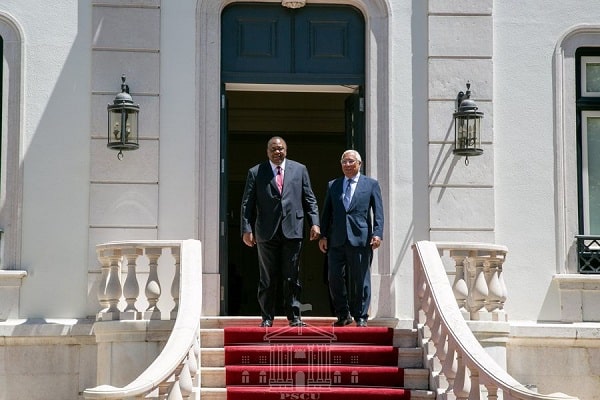 President Kenyatta, who is in Portugal on a two-day State Visit, led a Kenyan delegation that included Cabinet Secretaries Raychelle Omamo (Foreign Affairs) and Najib Balala (Tourism) at the meeting that culminated in the signing of 3 bilateral agreements on air services; political consultations; and diplomatic training.

Earlier, the Kenyan Head of State was received by his Portuguese host at the iconic Jerónimos Monastery in central Lisbon in an elaborate military ceremony that included a Guard of Honour and a Gun Salute by the Forças Armada (The Portuguese Armed Forces).

After the elaborate reception ceremony, President Kenyatta took a short drive, escorted by a ceremonial cavalry of horse riders, to the nearby Belém Palace, the official residence of the Portuguese President, where the two leaders led their respective delegations in bilateral talks and addressed the media.

©Standard Gazette, 2021. Unauthorized use and/or duplication of this material without express and written permission from this site’s publisher is strictly prohibited. Excerpts and links may be used, provided that full and clear credit is given to Standard Gazette with appropriate and specific direction to the original content.
Facebook0
Twitter0
Whatsapp0
Google+
Pinterest0
Linkedin0
DiggDigg0
Tumblr0
Stumbleupon
VKontakte0
Reddit0
Delicious0
Weibo0
Xing0
Print0
E-mail0
Total
0
Antonio CostaKenyaPortugalSao BentoUhuru Kenyatta