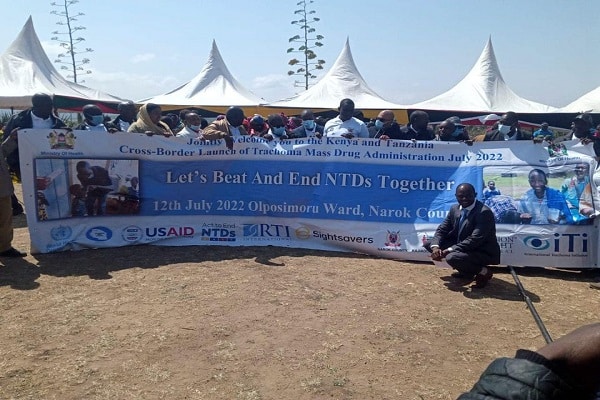 The exercise, launched on Tuesday at Olposimoru centre in Narok West sub-county, is a collaboration between the Kenyan and Tanzanian ministries of health and targets cross border pastoral Maa community living across the two East African neighbours.

During the launch, the Head of the Division of vector-borne and neglected tropical diseases at the ministry of health Wycliffe Omondi said synchronizing drug administration across the two countries remains the most effective way to decisively deal with trachoma.

"Giving medication is not the only solution. Integrating other measures like hygiene and environmental cleanliness will go a long way in dealing with the problem. The government is going out of its way to provide medication to community members, and I urge them to take the medication," Said Omondi.'

According to George Kambona, Tanzania's NTD programme manager, previous efforts by the two countries to deal with the problem independently were not as effective. He said the current coordinated efforts between the two governments will ensure that the vast majority of the pastoral community is reached.

Peter Otinda from Sight savers, one of the partners supporting the initiative, says members of the Maa community move along the common border in search of pasture for their livestock, making the synchronized cross-border exercise the most effective in reaching targeted groups.

The mass drug administration will be conducted for five days targeting an estimated 1,324,392 beneficiaries across four counties of Narok and Kajiado in Kenya and Longido and Ngorongoro in Tanzania. 228,360 people are expected to be treated in Ngorongoro, with 161,367 others targeted in Longido.

©Standard Gazette, 2021. Unauthorized use and/or duplication of this material without express and written permission from this site’s publisher is strictly prohibited. Excerpts and links may be used, provided that full and clear credit is given to Standard Gazette with appropriate and specific direction to the original content.
Facebook0
Twitter0
Whatsapp0
Google+
Pinterest0
Linkedin0
DiggDigg0
Tumblr0
Stumbleupon
VKontakte0
Reddit0
Delicious0
Weibo0
Xing0
Print0
E-mail0
Total
0
KenyaNarok WestTanzaniaTrachomaWycliffe Omondi