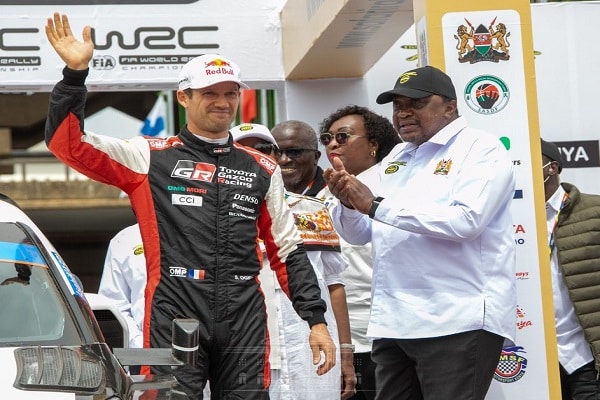 President Uhuru Kenyatta, on Thursday, June 23, 2022, announced that Kenya will continue hosting the World Rally Championship for the next five years as per the sealed agreement with the International Automobile Federation (FIA).

The President spoke at the Kenyatta International Convention Centre, Nairobi, where he flagged off the second edition of the World Rally Championship.

"The historic nature of this rally is undeniable. Last year (2021), a record of 78 million people in 150 countries watched the rally. In addition, the rally was of great benefit to the country, injecting approximately Kshs 6 billion into our economy, with every sector sharing in the pie, including players in the hospitality and transport sectors as well as micro, small and medium enterprises in Naivasha and its surrounding towns," President Kenyatta said.

The Head of State expressed optimism that this year's event will be more significant and attract more spectators across the globe, projecting Kenya as an attractive investment destination choice.

"We expect that this year's event will be bigger and even better. Already, the enthusiasm by spectators and the euphoria in cities and towns across the country is unmistakable. This is a clear indication of the close connection that Kenyans of all ages and from different parts of the country have with this sport," he said.

He thanked FIA, the World Rally Championship team and all stakeholders for organizing the successful event, saying the Safari Rally enjoys a special place in the country's national heritage as it tells the story of its rich cultural tapestry, the warmth of its people and the diversity of its splendour.

Noting that Kenya's Safari Rally is one of the toughest in the world, President Kenyatta said the motorsport is a perfect fusion of human and machine, adding that it attracts millions of fans and enthusiasts globally.

"Indeed, the Safari Rally is one of the toughest rallies in the World Rally Championship series, with a remarkable course that takes drivers into Kenya's undulated wild and in close view of our diverse wildlife.

"The Safari Rally has inspired many generations of Kenyans to dream of achieving unparalleled excellence. It is an event that unifies Kenyans of all walks of life through our shared love of excellence, determination, and triumph against the odds," he said.

©Standard Gazette, 2021. Unauthorized use and/or duplication of this material without express and written permission from this site’s publisher is strictly prohibited. Excerpts and links may be used, provided that full and clear credit is given to Standard Gazette with appropriate and specific direction to the original content.
KenyaUhuru KenyattaWorld Rally Championship
0 12
Share