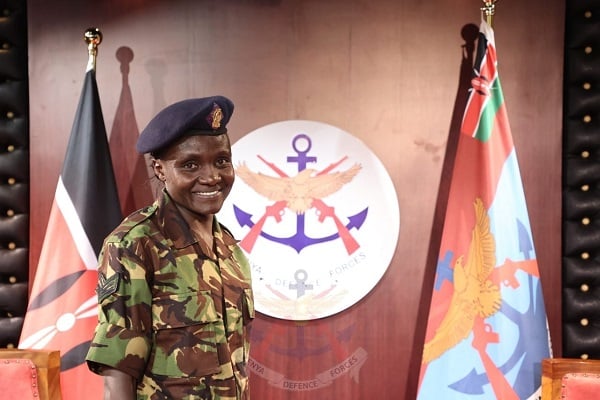 In his remarks, before the investiture of ranks, the CDF congratulated Sgt Jepkosgei for her excellent work in representing the Country in significant races and for improving on her timings which have seen her break multiple world records.

"We are very grateful for your continuous hard work and for representing Kenya and KDF well. We wish you the best, as competing at such high levels requires hard work and determination. I am confident you will continue doing better since you are still young," said General Kibochi.

Sergeant Jepkosgey scooped the silver medal with a time of 2.18.07 and thanked the CDF for the promotion citing it as "an honor." She also appreciated how the Kenya Defence Forces take care of its athletes with particular regard for physiotherapy.

Sergeant Jepkosgei's breakthrough took place in 2019 when she won both the half marathon and marathon in New York City in a time of 1:10:07 and 2:22:38, respectively. Two years later, she followed the win with another gold medal at the 2021 London Marathon, improving her earlier time in New York with five minutes less, registering a time of 2:17:43.

At the Prague Half Marathon in 2017, Sergeant Jepkosgei represented Kenya and became the first woman to break 65 minutes for the half marathon with her 64:52 world record 13.1-mile.

©Standard Gazette, 2021. Unauthorized use and/or duplication of this material without express and written permission from this site’s publisher is strictly prohibited. Excerpts and links may be used, provided that full and clear credit is given to Standard Gazette with appropriate and specific direction to the original content.
Benjamin KipropCDFDurbanElijah KorangaJoyciline JepkosgeiLondon MarathonMuthuri KiuguNew YorkPeter NjiruPragueRobert Kibochi
0 5
Share