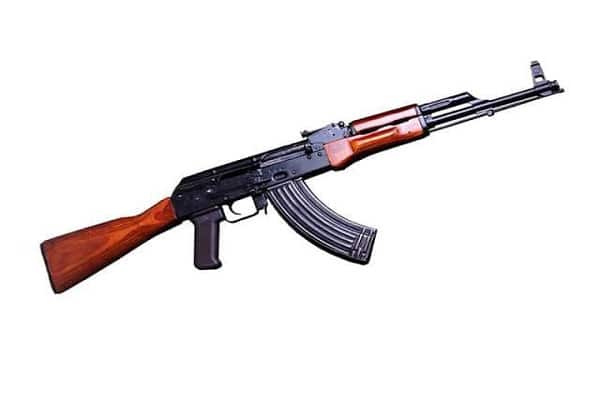 A 55-year-old man cheated death by a whisker on Tuesday night in Nyeri county, central Kenya, after he snatched a firearm from a robber who had attacked him and made away with his hard day's labour of Sh 200 ($2).

"In a classical case of the hunter becoming the hunted, Irungu Mwangi shocked Chaka market residents by his sheer display of bravado after wrestling down the assailant and snatching the firearm from him," said the Directorate of Criminal Investigations (DCI).

Irungu was walking home at around 8pm. On reaching a nearby school, Chaka primary school was accosted by a lone gunman who pointed an AK-47 assault rifle at his chest and ordered him to lie down without hesitation.

Irungu obliged, and when the thug demanded money, he fished out the only Sh200 ($2) note and handed it to him. The thug demanded for more money as Irungu pleaded for his life, saying that that's all he had remaining from his day's work.

Unconvinced, the thug bent forward and began ransacking Irungu's pockets. He stepped on his back with one foot and placed the firearm on the ground to have unfettered access to all of Irungu's pockets.

What a terrible miscalculation from the thug who, seconds later, was fighting to regain control of the firearm from Irungu, as the prey turned out to be the predator.

Irungu shoved the assailant to the ground and grabbed the firearm, leading to a brief scuffle as the thug tried to regain control of the gun.

But it was too late for him as the 55-year-old man had held the firearm tightly at the pistol grip and the hand guard, giving the thug little chance of regaining the assault rifle. Luckily for him, Irungu didn't understand the working mechanism of the firearm, and as he fumbled on how to chamber a round and fire, the attacker disappeared into the darkness.

Also recovered at the scene of the scuffle was a police beret belonging to the Administration Police Service.

A manhunt for the suspect is currently ongoing.

©Standard Gazette, 2021. Unauthorized use and/or duplication of this material without express and written permission from this site’s publisher is strictly prohibited. Excerpts and links may be used, provided that full and clear credit is given to Standard Gazette with appropriate and specific direction to the original content.
Facebook0
Twitter0
Whatsapp0
Google+
Pinterest0
Linkedin0
DiggDigg0
Tumblr0
Stumbleupon
VKontakte0
Reddit0
Delicious0
Weibo0
Xing0
Print0
E-mail0
Total
0
AK-47assailantManNyeri CountyRifle