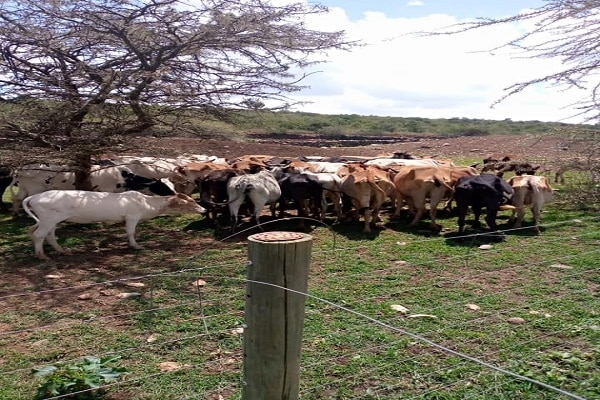 A quick response by the multi-agency security team foiled a mid-night theft of 19 heads of cattle from the home of Cyrus Koech, a resident of Mutharakwa, Kirima sub-county in Laikipia county, Kenya's Rift Valley.

The foiled banditry raid came at a time when the County has experienced a lengthy period of peace following heightened security efforts by the multi-agency security teams.

The raiders, who had probably intended to succeed in their surprise visit, were shockingly cornered as they attempted to flee against a strategic deployment of security teams.

"They were waylaid by our indefatigable multi-agency security teams a short distance from the victim's home, and all the 19 heads of cattle and a haul of sheep stolen from different homes recovered," said the National Police Service in a statement.

In efforts to completely limit the operating space by bandits in Laikipia County, the multi-agency security command completed the trench work along the Laikipia Nature Conservancy (LNC) border with residential areas.

This development, coupled with the enhanced security presence, has greatly minimized the movement of bandits from their hideouts in neighbouring counties into settlement areas of Laikipia.

Police have thanked the residents of what was previously known as 'the disturbed areas' of Laikipia for sharing timely information that has helped security teams to impede isolated attacks staged by cattle rustlers, a gesture that has subsequently helped improve the security situation in the County.

©Standard Gazette, 2021. Unauthorized use and/or duplication of this material without express and written permission from this site’s publisher is strictly prohibited. Excerpts and links may be used, provided that full and clear credit is given to Standard Gazette with appropriate and specific direction to the original content.
CattleraidSecurity Team