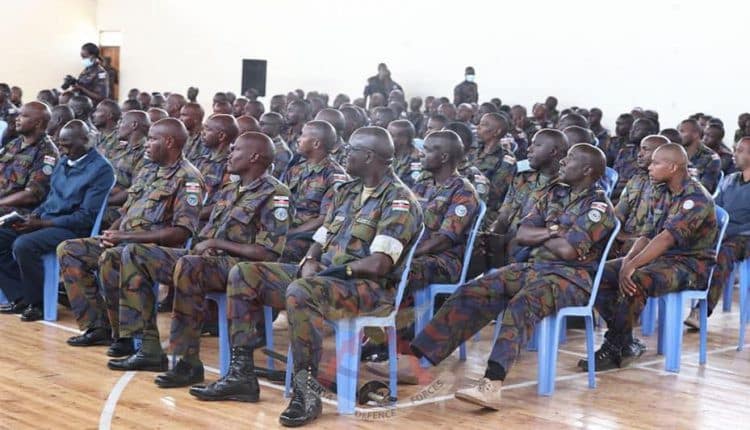 The Military Wives Association of Kenya (MWAK) reached out to spouses and widows of Military Personnel at Moi Air Base (MAB) in Eastleigh, Nairobi, with its mentorship program early this week.

Mentorship is one of the core pillars on which MWAK is founded; it targets women to empower them economically through skill training and enlightens them on available opportunities for women in Government and Non-Governmental institutions.

In her opening remarks, MWAK Chairperson, Mrs. Tabitha Kibochi, called upon the women to take up home responsibilities, for they are the pillars to which their homes stand.

"Even as we empower each other, let us respect and encourage our husbands to invest in the future," she added.

Representatives from the Ministry of Public Service, Youth, and Gender, present at the forum, highlighted the government's efforts in empowering women through platforms such as the Women Enterprise Fund (WEF), Youth Enterprise Development Fund (YEDF), and the National Government Affirmative Action Fund (NGAAF).

On the other hand, their male counterparts were not left behind as MWAK enlightened them on the association's mission of improving the holistic well-being of all KDF families and ensuring the welfare of military families is well taken care of.

Addressing the men in uniform, Chief of Compensation and Welfare (KDF) Brigadier John Khahoya further highlighted MWAKs' contribution in championing for better welfare of military families through advocacy, ensuring a soldier's state of mind is well taken care of for them to undertake their responsibilities effectively.

©Standard Gazette, 2021. Unauthorized use and/or duplication of this material without express and written permission from this site’s publisher is strictly prohibited. Excerpts and links may be used, provided that full and clear credit is given to Standard Gazette with appropriate and specific direction to the original content.
familiesMWAK
0 8
Share